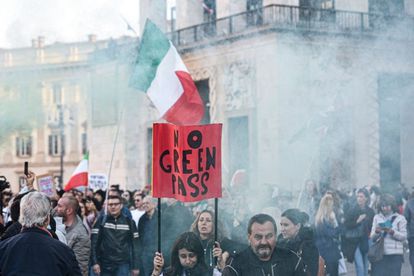 People gather during a protest against the so-called Green Pass on Piazza Duomo in Milan on 16 October 2021. Photo: Piero CRUCIATTI / AFP

People gather during a protest against the so-called Green Pass on Piazza Duomo in Milan on 16 October 2021. Photo: Piero CRUCIATTI / AFP

The number of workers taking sick days has surged in Italy since the introduction last week of mandatory coronavirus certificates for all employees, official data showed Thursday.

So-called “green passes” have been compulsory for access to the workplace since 15 October, as the Rome government opted for one of the world’s strictest anti-Covid regimes.

Figures provided to AFP by the national welfare agency INPS show that on 15 October more than 94 100 people called in sick, 28% more than in the previous week.

Calling in sick is one way for workers who do not want to comply with the new requirements to avoid the punishment of being suspended on no pay.

Green passes are available to everyone who is vaccinated or recently recovered from Covid-19, but can also be obtained by getting a negative test, at the person’s own expense.

Government figures show a spike in the number of green passes issued following a negative test, with almost 915 000 on Monday, some 600 000 on Tuesday and around 800 000 on Wednesday.

Prime Minister Mario Draghi has defended the green pass as a way to boost vaccination rates and avoid further lockdowns, but the measure has sparked pockets of fierce resistance.

The pandemic “is under control” thanks to all the Italians who got inoculated, including those “who chose to do it in the last weeks, overcoming their hesitations,” Draghi said Wednesday.

Almost 86% of Italians over the age of 12 have received at least one vaccine jab, and almost 82% have been fully vaccinated.

Italy has been one of the countries worst hit by the pandemic, with more than 131 000 deaths, but infection rates dropped in recent months as vaccination rates increased.