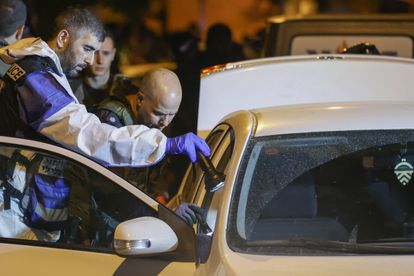 Israel conducted a large-scale manhunt on Friday for a pair of Palestinians suspected of killing three Israelis in an axe attack as the Jewish state marked its founding.

The deadly attack on Thursday night in Elad, a central city mainly populated by ultra-Orthodox Jews, was the sixth in which Israelis have been targeted since 22 March.

The attack followed a tense period in which the Muslim fasting month of Ramadan, the Jewish festival of Passover and the Christian holiday of Easter overlapped.

Tensions have boiled over into violent clashes between Israelis and Palestinians at the Al-Aqsa mosque compound, a highly contested site in Jerusalem’s Israeli-annexed Old City.

Palestinians have been angered by an uptick in Jewish visits to the Al-Aqsa compound, where by longstanding convention Jews may visit but are not allowed to pray.

Israel has said the status quo would remain unchanged at the site known to Jews as the Temple Mount.

The United States and Palestinian president Mahmud Abbas condemned the attack. Abbas warned it could lead to spiralling violence.

But the Gaza Strip’s Islamist rulers Hamas and Islamic Jihad, another Palestinian armed group, praised the latest violence, calling it a consequence of unrest at Al-Aqsa. Neither claimed responsibility.

“This operation demonstrates our people’s anger at the occupation’s attacks on holy sites,” Hamas spokesman Hazem Qassem said of the Elad attack.

“The storming of the Al-Aqsa mosque cannot go unpunished.”

Israeli security forces have mounted a massive search operation for the attackers, identified by the police as Assad Yussef al-Rifai, 19, and Subhi Imad Abu Shukair, 20.

As helicopters and drones patrolled overhead in search of the perpetrators, young ultra-Orthodox Jewish men in crisp white shirts were seen linking arms and chanting near the scene of the murders.

Women gathered on balconies overlooking the site, as masked forensic officers packed the bodies of the dead into bags and police stopped and searched cars.

A 31-year-old IT worker who gave his name as Yehuda told AFP he was afraid that “the killers have not yet been caught”.

“We suffer hatred and get murdered with an axe,”

he said at the funeral of Oren Ben Yiftach, a 35-year-old from Lod who was among the three killed.

Police asked the public to provide information on the suspects after publishing their pictures and names. They were described as residents of the village of Rummanah near Jenin in the occupied West Bank.

The Israeli prime minister’s office identified the three dead as Yonatan Habakuk, 44, and Boaz Gol, 49, both from Elad, as well as Ben Yiftach.

“We will get our hands on the terrorists… and ensure they pay the price,” Prime Minister Naftali Bennett said.

The majority of Elad’s 50,000 residents are members of Israel’s ultra-Orthodox Jewish community, known as haredim.

Israel’s Defence Minister Benny Gantz announced a closure of the West Bank — in place for the anniversary — would remain in force through Sunday.

The Palestinian Red Crescent said 38 Palestinians were wounded Friday in clashes with Israeli forces near Nablus in the West Bank, including two teenagers who were shot with rubber-coated bullets.

A string of anti-Israeli attacks since March 22 have killed 18 people, including an Arab-Israeli police officer and two Ukrainians.

Two of the deadly attacks were carried out in the Tel Aviv area by Palestinians.

A total of 27 Palestinians and three Israeli Arabs have died during the same period, among them perpetrators of attacks and those killed by Israeli security forces in West Bank operations.

“the joy of independence day had been interrupted in an instant”.

For Palestinians, the anniversary of Israel’s 1948 declaration of independence marks the Nakba, or “catastrophe”, when more than 700 000 fled or were expelled during the war surrounding Israel’s creation.

Last week, Hamas threatened Israel with rocket fire and attacks on synagogues if its security forces carry out further raids on the Al-Aqsa mosque compound.

“Whoever has a rifle must have it ready, and whoever does not have a rifle must prepare their knife or their axe,”

Thursday’s violence at Al-Aqsa followed a tense April, in which nearly 300 people were hurt in clashes between police and Palestinians at the site.

Neighbouring Jordan on Friday condemned “all forms of violence against civilians”, warning that “everyone will pay the price for the current escalation”.