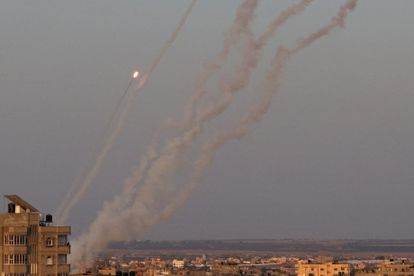 A salvo of rockets is fired from Gaza City towards Israel, on 7 August, 2022. – An Islamic Jihad source that truce talks are taking place after three days of deadly fighting between the Gaza militants and Israel. Photo: SAID KHATIB / AFP

A salvo of rockets is fired from Gaza City towards Israel, on 7 August, 2022. – An Islamic Jihad source that truce talks are taking place after three days of deadly fighting between the Gaza militants and Israel. Photo: SAID KHATIB / AFP

The latest deadly flare-up between the Israeli military and Palestinian militants in Gaza has drawn mixed reactions from the international community, along with a chorus of calls for a de-escalation.

National Security Council spokesman John Kirby urged calm from both sides but said US ally Israel had the right to defend itself.

“We certainly urge all sides to avoid further escalation… We absolutely fully support Israel’s right to defend itself against terrorist groups that are taking the lives of innocent civilians in Israel,”

Russia, whose ties with Israel have been tested by Moscow’s invasion of Ukraine, appeared to pin initial blame on the Jewish state.

“We are observing with profound worry how events are evolving,”

foreign ministry spokeswoman Maria Zakharova said, adding that Moscow was calling “on all the parties involved to show maximum restraint”.

“The new escalation was caused by Israeli army firing into the Gaza Strip on August 5, to which Palestinian groups responded by carrying out massive and indiscriminate bombardments on Israeli territory,”

Britain called for “a swift end to the violence”, while reasserting its support of Israel.

“The UK stands by Israel and its right to defend itself,”

“We condemn terrorist groups firing at civilians and violence which has resulted in casualties on both sides.”

Health authorities in the Palestinian enclave have said a five-year-old girl was among 15 people killed in Israeli bombardment.

No deaths have been reported on the Israeli side.

Paris “condemns the rocket fire on Israeli territory and restates its unconditional commitment to Israel’s security”, a spokesperson said, warning that “civilians would be the first victims” of a new escalation and urging all parties to show “restraint”.

The EU called for maximum restraint, as Israel warned Saturday that its air strikes could last a week and as cross-border fire reverberated for a second day, in the worst escalation since the last Gaza war in 2021.

“The European Union follows with great concern the latest developments in and around Gaza,”

“The EU calls for maximum restraint on all sides… While Israel has the right to protect its civilian population, everything must be done to prevent a broader conflict,” he said.

Egypt, historically a broker between Israel and armed groups in Gaza, has reportedly been seeking to mediate.

“Contacts are maintained around the clock with everyone, so that things do not get out of control,” President Abdel Fattah al-Sisi said in a speech.

Iran, a supporter of Gaza militants, said the territory was “not alone” in its fight.

“We are with you on this path until the end, and let Palestine and the Palestinians know that they are not alone,”

The Saudi foreign ministry condemned “the attacks which the Israeli occupation forces have carried out on the Gaza Strip”, adding that it “stands beside the brotherly Palestinian people” and calling on the international community to help stop the escalation.

The Arab League “condemned in the strongest possible terms the ferocious Israeli aggression against Gaza”.

The secretary-general of the six-member Gulf Cooperation Council, Nayef al-Hajraf, “condemned the brutal military aggression of the Israeli occupation forces on the Gaza Strip” and “stressed the need for the international community to act urgently” to protect civilians.