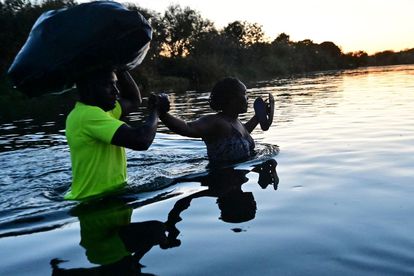 Haitian migrants cross the Rio Grande river at the Mexico-US border near Ciudad Acuna, Coahuila state, Mexico, on September 23, 2021. The US special envoy to Haiti resigned on September 23 two months after his appointment, denouncing the Biden administration’s deportation of Haitian migrants from the US-Mexico border back to their poverty-stricken homeland.
PEDRO PARDO / AFP

Haitian migrants cross the Rio Grande river at the Mexico-US border near Ciudad Acuna, Coahuila state, Mexico, on September 23, 2021. The US special envoy to Haiti resigned on September 23 two months after his appointment, denouncing the Biden administration’s deportation of Haitian migrants from the US-Mexico border back to their poverty-stricken homeland.
PEDRO PARDO / AFP

Deportation fears mounted Thursday among Haitian migrants camped out in northern Mexico near the border with the United States following the sudden arrival of dozens of police officers at the site.

“Are they going to deport us or kick us out of here?” asked one of the hundreds of migrants waiting nervously to see what would happen.

Around 50 police vehicles arrived early Thursday in the vicinity of a park in Ciudad Acuna where migrants have been staying for about a week, triggering alarm.

“I have nothing in my country. What am I going to do?” said a Haitian woman who gave her name as Sonia.

The deployment came after Mexican migration authorities said the foreigners should return to wherever in the country they submitted their asylum applications to finish the process.

Those papers allow migrants to remain legally in Mexico and avoid deportation while waiting to enter the United States.

Mexican police at Rio Grande not yet authorised to arrest

The police convoy stopped along the banks of the Rio Grande river, which hundreds of Haitians cross daily between the US and Mexican sides of the border for food and supplies.

An officer told AFP that the police have only been asked to deploy at this point and not to arrest anyone.

Police closed the gates to the park, restricting the entry of more people or vehicles, while a helicopter buzzed overhead.

So far the migrants have not been evicted from the encampment or prevented from crossing the Rio Grande, some carrying children or belongings on their backs.

“We have come to coordinate care for this population that is in a vulnerable situation. Respect for these people is guaranteed,” National Migration Institute commissioner Francisco Garduno told reporters.

“The government of Mexico will provide air and land transportation to allow migrants to return to the states from which they left, to continue with their process or to support their safe return to their countries of origin,” he said.

That would force many to return to the southern city of Tapachula near the border with Guatemala where tens of thousands of migrants are waiting for documents that would allow them to continue north.

Many of the Haitians have traveled overland from Chile and Brazil, which gave them refuge after the 2010 earthquake that left around 200,000 people dead in Haiti.

According to UNICEF, the United Nation’s children’s agency, 40 percent of Haitian migrants are minors.

President Joe Biden’s administration has begun to repatriate Haitians by air from the Texas border city of Del Rio, prompting a warning from the United Nations that people with genuine asylum claims may be at risk.

In a scathing letter of resignation, the US special envoy to Haiti, Daniel Foote, on Thursday denounced what he called an “inhumane, counterproductive decision” to repatriate the Haitians.

At least 19,000 more Haitians are stranded near the Colombia-Panama border waiting to continue their journey through the lawless Darien jungle.

US Secretary of State Antony Blinken, Mexican Foreign Minister Marcelo Ebrard and their Central American counterparts discussed the crisis on Thursday at the UN General Assembly in New York.

Ebrard called on the international community to step up to address the problem of migration.

“International cooperation is a crucial element for the communities of origin, transit and destination to develop their capacities without having to resort to emigration,” Ebrard said.