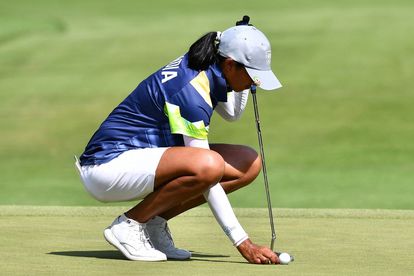 India’s Aditi Ashok sets up her putt on the 18th green in round 1 of the women’s golf individual stroke play during the Tokyo 2020 Olympic Games at the Kasumigaseki Country Club in Kawagoe on August 4, 2021.
Kazuhiro NOGI / AFP

India’s Aditi Ashok sets up her putt on the 18th green in round 1 of the women’s golf individual stroke play during the Tokyo 2020 Olympic Games at the Kasumigaseki Country Club in Kawagoe on August 4, 2021.
Kazuhiro NOGI / AFP

Aditi Ashok was the youngest player at the 2016 Olympics when she made women’s golf into headline news in India by shooting back-to-back 68s to be tied eighth on six-under par after 36 holes.

Five years later, the world number 200 is near the top of another star-studded leaderboard at the Tokyo Games, tied second with world number one Nelly Korda after Wednesday’s first round.

“A lot of people were trying to figure out what golf was, so that they could understand how I was playing and if I had a chance to win a medal,” she told reporters at Kasumigaseki Country Club Wednesday after her opening four-under par 67.

Ashok remembered as ‘the girl who did well at the Olympics’

Ashok faded in Rio during the final two rounds to finish 41st, but her days of being anonymous in a country of 1.3 billion people were over.

“For the next six months to a year everybody remembered and recognised me from the Olympics,” she said.

“Even though I won like three European Tour events after that, people still remember me as the girl who did well at the Olympics.”

This time around she says she is more prepared for Olympic competition, and the attention it brings from back home.

“Last time I was a rookie basically. I just finished my high school exams and then I was at the Olympics,” Ashok said after a round containing five birdies and just one blemish at the 18th.

“Playing on the LPGA Tour the last five years makes you way better as a player than I was at Rio.”

Mum, Mash, is the caddie

“I didn’t finish as well as I wanted to last time, but just seeing the effect that it had on golf in India was inspiring and that’s kind of what motivated me for this one as well.”

Ashok recalled how she started playing golf, not a common pursuit for girls growing up in Bangalore like her.

“Me and my parents started playing golf at the same time,” recalled Ashok.

“We used to have breakfast at this restaurant that overlooked a golf driving range and so we wanted to walk in and try it out. So that’s what got me started.”

Ashok had her dad as caddie in Rio, and this time round it is her mum, Mash.

“Last time I had my dad on the bag, so the experience was just so incredible I was like ‘I want to have my mum next time’ and I made good on that promise,” said Ashok.

‘Women’s golf is not really on the radar’ in India

The impact of her first two rounds at the Rio Olympics were, she admitted, “quite big”.

So what does she think would happen were she to win a medal this time?

“Women’s golf is not really on the radar of sports or people in India,” she said. “The Impact would be huge.”

“I think it would go to like hundreds of thousands for sure,” said Ashok. “Yeah, it would be really big.”