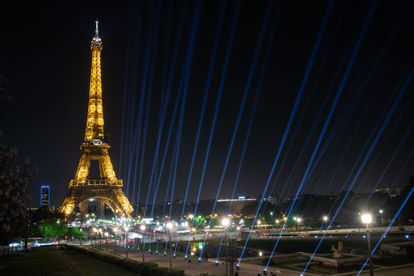 A picture taken at night on 26 April, 2022 shows a view of the illuminated Eiffel Tower. Photo by – / AFP

A picture taken at night on 26 April, 2022 shows a view of the illuminated Eiffel Tower. Photo by – / AFP

The two men and a woman, originally from Romania, were arrested in the northeastern Paris suburb of Seine-Saint-Denis following a months-long investigation.

They suspect the three of deceiving tourists into betting on a shell game — where the victim tries to guess which cup hides a ball — with the promise of winning significant amounts of cash if successful.

The tourist is lured in by fake players, and never wins.

40 FAKE PLAYERS AT THE FOOT OF EIFFEL TOWER

Investigators identified about forty fake players and lookouts involved with half a dozen tables, the source added. All of them were from Romania.

In recent weeks, French police have conducted several operations to fight against scams or irregular street vendors, as tourists flock back to the City of Light with the easing of the Covid-19 pandemic.

The Eiffel Tower is one of the world’s most famous buildings and welcomes some seven million visitors a year.