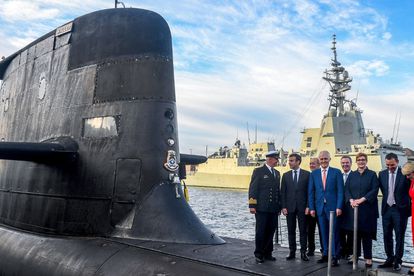 (FILES) A file photo taken on May 2, 2018 shows French President Emmanuel Macron (2/L) and Australian Prime Minister Malcolm Turnbull (C) standing on the deck of HMAS Waller, a Collins-class submarine operated by the Royal Australian Navy, at Garden Island in Sydney. Australia is expected to scrapped a 66 billion USD deal for France to build submarines, replacing it with nuclear-powered subs using US and British technology.
BRENDAN ESPOSITO / POOL / AFP

(FILES) A file photo taken on May 2, 2018 shows French President Emmanuel Macron (2/L) and Australian Prime Minister Malcolm Turnbull (C) standing on the deck of HMAS Waller, a Collins-class submarine operated by the Royal Australian Navy, at Garden Island in Sydney. Australia is expected to scrapped a 66 billion USD deal for France to build submarines, replacing it with nuclear-powered subs using US and British technology.
BRENDAN ESPOSITO / POOL / AFP

Choosing a full-fledged confrontation with the United States due to the loss of a mega-contract for submarines for Australia, France is making a risky bet and other nations are not rushing to its defense.

After Australia renounced its deal for conventional submarines in favor of US nuclear-powered ones, France took the extraordinary step of pulling its ambassadors from both Washington and Canberra for consultations.

Bertrand Badie, an international relations professor at the Sciences Po institute in Paris, said France had put itself in a position where it can only appear to be backing down or losing face once its ambassador returns to the United States, its historic ally.

“When you get into a crisis like this, you better know where the exit is,” he said.

Australia said it decided that nuclear submarines were a better choice to ensure its maritime edge as it announced a new three-way alliance with the United States and Britain widely seen as aimed at China — whose rise has been the overriding priority of US President Joe Biden’s administration.

French President Emmanuel Macron, who has stayed subdued publicly, is set to speak to Biden in the coming days.

But Foreign Minister Jean-Yves Le Drian has used language rarely used among friendly nations, alleging “lying” and “duplicity” and saying France was “stabbed in the back” by Australia.

He so far has no meeting scheduled on the sidelines of this week’s UN General Assembly in New York with US Secretary of State Antony Blinken, himself a French speaker known for his love of Europe.

No backing from Europe

With a contract worth Aus$50 billion ($36.5 billion, 31 billion euros, R536 billion) on its signing in 2016, the French anger may show the country’s powerful defense industry that political leaders are pressing their case.

But the diplomatic impact is less certain, with France appearing isolated at the start of the UN General Assembly.

Fellow EU power Germany, which holds elections next Sunday, is hardly eager to get involved. The government simply said it took note of the dispute.

Celia Belin, an expert on transatlantic relations at the Brookings Institution, said that France could rally fellow European nations around shared perceptions that the Biden administration is lacking a Europe strategy.

“France needs to share this assessment with European allies and put it on the table with the Americans to find solutions,” she said.

While most European nations rejoiced at seeing Biden defeat the divisive Donald Trump, Biden also triggered criticism from European allies over his determined withdrawal from Afghanistan, which led to a swift Taliban victory after a 20-year NATO-backed war.

Another sore point is the continued Covid-19 ban on most Europeans from traveling to the United States, even as the European Union — spurred by nations depending on tourism — relaxed entrance requirements for Americans.

‘Bold’ action needed to repair US relations with France

Max Bergmann, a former State Department official now at the left-leaning Center for American Progress, said Biden needed to take “bold steps to repair relations with France to prevent this from spiraling.”

He said Biden could invite Macron to the White House, embrace the French leader’s vision of a European defense capacity and move to end the travel ban.

“The danger is that this incident poisons the well and upends transatlantic cooperation on all sorts of critical areas from NATO, tech and trade cooperation and developing a unified approach to China and Russia,” he said, while saying that the alliance benefited Australia’s security.

Biden also earlier annoyed Eastern Europeans by waiving most sanctions on Nord Stream 2, a gas pipeline between Russia and Germany that critics say will let Moscow exert new pressure on smaller nations it can bypass.

The Biden administration said it took the decision partly for the sake of ensuring strong relations with Germany.

“Europe has never been as divided on its foreign policy options,” Badie said.

Le Drian also has no plans to meet individually in New York with his new British counterpart, Liz Truss, and France scrapped meetings scheduled this week with Britain’s defense minister.

“They have the right to be angry,” Francois Heisbourg of the Paris-based Foundation for Strategic Research said of the French.

“The risk for France is that anger becomes its guide,” he said.