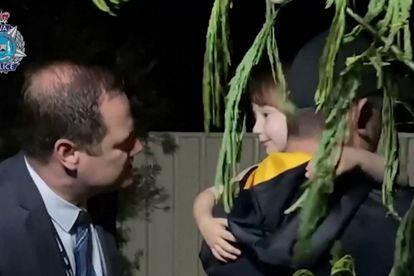 A four-year-old Australian girl abducted from a campsite 18 days ago was discovered “alive and well” during a raid on a locked house Wednesday, telling her shocked and elated rescuers: “My name is Cleo.”

Many feared the search would end in tragedy, but after a night raid on a home in the coastal town of Carnarvon – just a short drive from where she disappeared – police announced the little girl had been found alone, but alive.

“One of the guys jumped in front of me and picked her up,” said detective Cameron Blaine, one of the four rescuers who entered the house around 1:00 am (17:00 GMT Tuesday).

Blaine said that after the initial shock he asked the little girl her name three times before receiving her electrifying response: “My name is Cleo.”

Police admitted “seasoned detectives” were “openly crying with relief” at the discovery and when Cleo was reunited with her parents at a hospital a short time later.

Her mother Ellie took to social media to express her relief. “Our family is whole again,” she posted on Instagram under a photo of Cleo.

Police later released an image of the beaming youngster on a hospital bed holding an ice pop, waving and smiling.

Officers said she was in good spirits and bouncing around like “a little energizer bunny.”

A 36-year-old local man has been detained and is said to be assisting with enquiries. He is expected to be charged later Wednesday.

Ellie Smith had earlier described her distress at waking at 6:00 am to find the family’s tent unzipped and her oldest daughter missing.

Her public pleas for help bringing Cleo home had prompted an outpouring of support from across Australia.

After the news broke, the usually quiet streets of Carnarvon, which boasts a population of about 4 500, were quickly filled with pink balloons and “welcome back” signs.

“There were tears in the eyes of many around town today. We are all so excited and happy, everyone just wanted Cleo back with her parents,” Carnarvon resident Julee Nelson told AFP.

“It has been a very painful period… everyone will be celebrating long and hard today. It’s all quite beautiful.”

Carnarvon Shire president Eddie Smith said the town, renowned for its banana plantations, had rallied together to help with the search.

“We are a strong little community and this has strengthened the bond amongst residents,” he told AFP. “I couldn’t be prouder.”

He first received a call at 1:38 am, but sheepishly admitted: “I didn’t answer it, I was asleep.” Still, within a few hours, he had received the “lovely” image of the girl smiling from a hospital bed.

“There will be movies made about this,” he said. “You never know what to expect, you hope for the best, but you prepare for the worst.”

“It’s great to provide the country with positive news.”

While police used human intelligence, surveillance footage and forensic analysis to find the girl, scores of volunteers scoured nearby bushland for clues.

Police last month had offered Aus$1 million (US$750,000) reward for information leading to Cleo’s recovery after she was feared abducted from the remote Blowholes campsite – about 1 000 kilometres (600 miles) north of Perth – on 16 October.

It is believed the abduction was unplanned and “opportunistic”. The suspect was not on a local list of sex offenders and only became a person of interest a day ago.

Premier McGowan paid tribute to the family. “Ellie and Jack, Cleo’s parents, they have been through a lot in the last 18 days, terrible trauma, some vicious attacks, and some, no doubt, very trying and sad times. To them, and all of our thoughts go to them.”