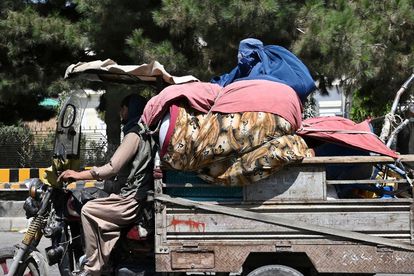 A a burqa-clad woman travels at the back of a three-wheeler motorcycle cart in Kabul on September 3, 2021.
WAKIL KOHSAR / AFP

A a burqa-clad woman travels at the back of a three-wheeler motorcycle cart in Kabul on September 3, 2021.
WAKIL KOHSAR / AFP

As a humanitarian catastrophe looms, relief organisations are scrambling to maintain their operations in war-ravaged Afghanistan, holding high-stakes talks with the Taliban in a bid to salvage their critical lifeline of aid.

Even before the Taliban’s lightning offensive that ousted the Western-backed government on August 15, Afghanistan was already heavily aid-dependent — with 40 percent of the country’s GDP drawn from foreign funding.

The UN has warned 18 million people are staring down the barrel of humanitarian disaster, and another 18 million could quickly join them.

Battered by decades of war, the country was also grappling with a prolonged drought. Then in 2020, the coronavirus pandemic added a fresh layer of strain to a barely functioning health system.

The Taliban onslaught sparked a new exodus, both within and beyond the country’s borders. According to the UN refugee agency, over half a million Afghans have become internally displaced this year.

And with Western sanctions against the Taliban threatening to stem the flow of funding, getting desperately needed help into the country could become harder than ever.

Role of women in Taliban government

The Taliban are pledging a softer brand of rule than during their first stint in power from 1996-2001 — but it remains unclear whether aid organisations will be able to operate freely and safely.

Several relief organisations have confirmed to AFP that they were in talks with the Taliban to continue their operations, or have already received security guarantees for their existing programmes.

“In all instances, we have been asked to continue our work,” Norwegian Refugee Council spokesperson Michelle Delaney said.

Given the Taliban’s grim record on women and girls’ rights, aid workers and UN officials have both sought assurances that they will be able to carry on with programmes focused on women, and retain female staff.

But it remains unclear how the Taliban’s pledges of a more moderate rule will translate into reality.

Earlier this year more than a dozen humanitarian workers told AFP that the group had demanded an end to projects helping women to be more independent, and barred female staff from entering territory they controlled.

“Everyone is wondering what is going to happen,” said Marianne O’Grady, the deputy country director for CARE Afghanistan, which focuses on women and girls’ rights.

For now, her organisation’s work around the country has continued unimpeded.

“We’ve been asked to continue our programming, of every type and at every level,” she told AFP.

Afghanistan has long been one of the world’s riskiest places for aid workers.

A US air strike in 2015 killed 42 people, including 14 medical staff, in a bombing that also levelled a Doctors Without Borders (MSF) trauma clinic in northern Kunduz — the single deadliest attack on relief workers in the 20-year war.

Ten others were killed in June by the Islamic State jihadist group while clearing landmines north of Kabul for The HALO Trust, a British charity.

But the International Committee of the Red Cross (ICRC), along with other organisations accustomed to working in parts of Afghanistan long under Taliban rule, say they have no plans to draw down their presence.

“The changes in Afghanistan have not changed our relationship with (the Taliban), and the current situation doesn’t change the way we seek to operate,” ICRC spokesman Florian Seriex said.

However, among the 122,000 people airlifted out in a mammoth US-led evacuation that ended on Monday were foreign aid workers — and with Kabul airport closed for now, flying staff in to replace them remains impossible.

Barely one percent of Afghanistan’s population were fully vaccinated against the virus last month, according to figures tallied by AFP.

Several aid groups told AFP that the cash crunch sparked by Washington’s freezing of central bank assets — which has prompted long lines outside banks in recent days — had halted salary payments to staff.

Restoring foreign aid flows remains dependent on the Taliban regime getting recognised, and several relief workers expressed concern that Western sanctions against the new regime could stem the flow of aid money.

“What we’re all facing is the question of what the future is for humanitarian aid coming into this country,” CARE’s O’Grady said.