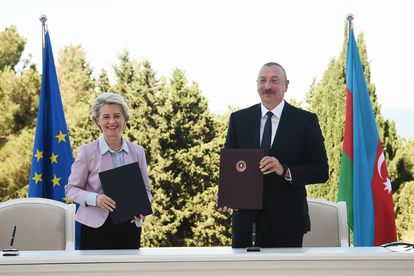 The European Union and Azerbaijan on Monday signed an agreement to double gas imports from the energy-rich Caspian nation to Europe which seeks non-Russian suppliers after Moscow’s invasion of Ukraine.

Natural gas supplies have emerged as a weapon between Russia and Europe since President Vladimir Putin sent troops to Ukraine on 24 February.

On a visit to Baku, European Commission President Ursula von der Leyen signed with Azerbaijani President Ilham Aliyev a memorandum on “a strategic partnership in the field of energy.”

In a few years, “we will double the supply of gas from Azerbaijan to the EU” to compensate for cuts in supplies of Russian gas, von der Leyen told a news conference alongside Aliyev.

“From next year on, we should already reach 12 billion cubic meters”

per year, she said.

The agreement also provides for the expansion of the Southern Gas Corridor running through Azerbaijan, Georgia, Turkey, and Greece — “to 20 billion cubic metres per year in a few years.”

Von der Leyen said Russian gas supplies to Europe were not “reliable” even before the start of Russia’s war on Ukraine and the EU was turning to “more reliable suppliers”.

“I’m glad to count Azerbaijan among them.”

Aliyev praised the deal as a “road map for the future,” saying the EU-Azerbaijan energy cooperation has already “changed the energy map of Europe.”

“Amid Russia’s continued weaponisation of its energy supplies, diversification of our energy imports is a priority for the EU.”

Ahead of von der Leyen’s visit, the European Commission said:

In May, EU leaders agreed to stop most Russian oil imports by the end of the year, as part of unprecedented sanctions they slapped on Moscow over the military action in Ukraine.

But the bloc put off an outright ban on Russian gas, which in 2021 amounted to 155 billion cubic metres — nearly 40% of EU’s needs.

Russia has already begun reducing its gas deliveries to prevent EU countries from replenishing reserves, prompting the European Commission to prepare “a gas demand reduction plan” to get through the next winter.

Under the deal, Azerbaijan will also tap into its vast potential in renewable energy — such as offshore wind and green hydrogen — to move away from overdependence on its role as a fossil fuel supplier.

Von der Leyen also called on Azerbaijan to join the Global Methane Pledge — currently supported by 119 countries — “to be consistent with our responsibilities on climate.”