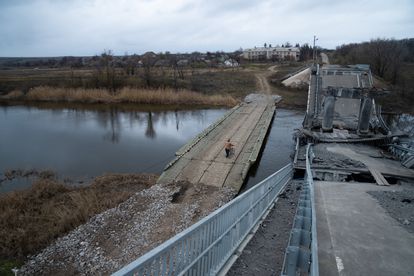 A local resident crosses the Ingulets river on a pontoon installed near destroyed bridge in the village of Kalynivs’ke, Kherson region on 16 November 2022. Photo: Ihor Tkachov / AFP.

A local resident crosses the Ingulets river on a pontoon installed near destroyed bridge in the village of Kalynivs’ke, Kherson region on 16 November 2022. Photo: Ihor Tkachov / AFP.

He was held for weeks in detention, beaten and electrocuted. He urinated blood. He lost 25 kilogrammes and thought of killing himself.

Anatoly Stotsky survived weeks of abuse at the hands of Russian and pro-Russian forces who had occupied the southern Ukrainian city of Kherson and threatened to kill his family.

“I contemplated killing myself,” Stotsky told AFP in an interview.

“But thinking about my family gave me the moral strength to endure it all,” said the Ukrainian, who turned 50 in detention.

After the Russian army retreated last week following eight months of occupation chilling accounts are emerging of abuse, mistreatment and torture in Kherson.

Stotsky, who spoke to AFP at his home in central Kherson, said he was arrested twice and held for weeks in detention where he was tied up, beaten and electrocuted by Russian and pro-Russian forces.

On April 25, the Russians came for Stotsky who was at home with his wife and three-year-old daughter.

“I gave them my weapon because they were threatening to kill my family,”

The Russians put a hood over his head and took him to what he thought was a police station close to his home.

In a cell he was tied to a chair and interrogated by three or four people.

“They beat me with a truncheon and put a pistol or a rifle to my head,” he said. Stotsky received blows to the ears and the top of his head as the Russians apparently tried to avoid leaving any marks.

Hooded men — who he thought were members of Russia’s security service, the FSB — questioned him on camera about the weapon found at his home.

The Russians took his fingerprints and a DNA sample. He was forbidden to leave the city and ordered to collaborate with Moscow forces.

He was released on May 4, tossed into the street with a hood over his head.

“When I came home, I was completely blue, I was covered in bruises,”

He made sure his wife and daughter left town, passing through a checkpoint near Zaporizhzhia, some 300 kilometres (around 190 miles) northeast of Kherson. He himself stayed behind, saying he was too scared to leave.

Stotsky was arrested again on July 6, as members of the civil resistance became increasingly active in the city, he said.

He believes that the second time he was most likely captured by members of the ministry of state security of the People’s Republic of Donetsk, annexed by President Vladimir Putin in late September.

The men told Stotsky they knew he had been in custody but said he had not been questioned properly.

“Now you are going to tell us everything, who you know and where your weapons are,”

he said he was told.

“For the first five or six days they would beat me,”

“At night they would not let me sleep. Every two hours they would come into my cell and force me to get up and say my name.”

He had to sit handcuffed to a pipe and could not lie down.

Every time his jailers entered his cell, he had to put a bag over his head or risk being beaten.

One day, he was taken to another cell for questioning.

Meal once every three days

“They tied my hands and feet, and put me on the ground. They attached clips to my little fingers,”

“They electrocuted me as I was lying on the ground. Your muscles contract and everything inside you twists.”

The Ukrainian said that access to the toilet was rarely allowed and he had to use empty bottles to relieve himself.

For the first two weeks, he had blood in his urine. “My kidneys did not function well,” he said.

He would receive food every three days and believes he has lost around 25 kilograms (55 pounds) in detention.

The cells had “holes in the walls” so he could speak to other detainees “not to lose my mind,” he added.

He was finally released on August 20.

This time Stotsky did not return home for fear of being arrested, and went to stay with relatives.

He said that the second time he was kept in a centrally-localed old office building that featured the flags of Japan, the United States and Ukraine at the entrance.

An AFP team tried to access the four-storey building located on 15, Pylyp Orlyk Street, but was turned away.

“An investigation is underway,”

a man at the entrance said, without providing further details.