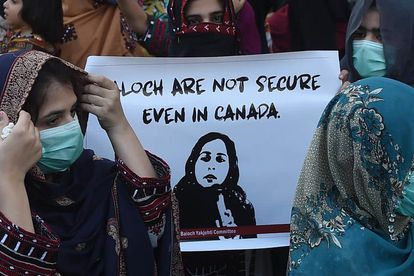 The 37-year-old activist who was found dead in the Harbourfront near Toronto’s lakeshore had gone missing after setting out for a walk. Canadian police said that they had no reason to suspect foul play but her family insists that “her death warrants closer inspection.”

The IHRC also wants the government of Canada to probe the role of Pakistani intelligence agencies in her “mysterious death.”

She had been a thorn in Islamabad’s side ever since her early twenties when she stood at the front of a rally for missing people in Balochistan clutching a picture of one of her many missing relatives.

She used social media to highlight the abductions, torture, forced disappearances, and other human rights violations that people in Balochistan were being subjected to, allegedly at the hands of Pakistan’s government and its army.

Back then, Pakistani authorities didn’t know her name but she soon became prominent. And in the following years, she rose up the ranks of activists fighting for independence for Balochistan – a resource-rich but restless province in Pakistan’s southwest.

In 2006, Karima joined the central committee of the Baloch Student Organisation (BSO) – a group she would go on to lead.

In 2008, Karima was standing in front of a judge in a Pakistani court on charges connected to her activism. The judge told her he was leaning toward handing her a more lenient sentence because she was a woman.

“If you are going to punish me, you should do that on the basis of equality – do not give me that concession because of my gender.”

Her brother Sameer recalled that it was just another example of an “extraordinary” woman’s dedication to her beliefs.

“I can’t forget that one November evening in 2015, when I had just finished my evening prayers, she came, put her head in my lap, and said she was going to go far away,” her mother Jamila Baloch recalled in a BBC interview.

“I said why? You never liked to go abroad. Why are you doing it now? She said it was a decision by her organisation.”

She had previously been issued a visa by a western country but decided not to go, her mother said, adding that her daughter couldn’t imagine herself living away from her beloved Balochistan.

“At the airport, I told her to go finish your education and come back soon. I fought back my tears, lest she will change her plans. Now I wish I had cried.”

Karima began a new life in Toronto, Canada, but she continued her fight for human rights and against the enforced disappearances and state operations in her homeland.

She also presented the forced disappearance cases of more than 20 thousand Balochs at the United Nation Human Rights Council.

The year after she resettled, she was named in the BBC’s annual list of 100 inspirational and influential women.

The region of Balochistan is spread over three countries.

While the major areas are in Pakistan, it extends as Sistan Balochistan in the neighboring Iran and also extends into Afghanistan across the Durand line.

It is the biggest province of Pakistan in sheer size as it occupies almost 43% of the country’s territory. But it is very sparsely populated, with just over 12.3 million people. The Baloch form about 5% of Pakistan’s population.

Economically and strategically, the province is of immense importance to the state of Pakistan.

It is rich in resources, said to be holding vast amounts of yet unexploited minerals like gold, copper, coal, silver, platinum, and uranium.

Pakistan has often blamed the “foreign hand,” including India, for the troubles in Balochistan, online platform scroll.in reported, while pointing to Iran for provoking Shias, a minority in Pakistan.

The armed struggle for independence in Balochistan has now got international attention due to the exploitation of its vast natural resources, alongside the construction of the Sino-Pak Economic Corridor traversing almost 870 km through the state as part of Beijing’s grand and ambitious Silk Road Project.