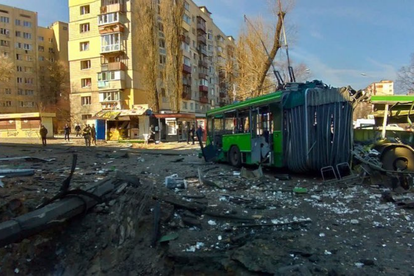 More than 3.5 million people have fled Ukraine since Russia’s invasion nearly a month ago, the United Nations has confirmed. Image: Vitali Klitschko/ Twitter

More than 3.5 million people have fled Ukraine since Russia’s invasion nearly a month ago, the United Nations has confirmed. Image: Vitali Klitschko/ Twitter

More than 3.5 million people have fled Ukraine since Russia’s invasion nearly a month ago, the United Nations said on Tuesday, adding the scale of the tragedy “far exceeds any worst-case scenario planning.”

More than 10 million people – over a quarter of the population in regions under government control before the February 24 invasion – are now thought to have fled their homes, including the millions of internally displaced people.

Unicef, the UN children’s agency, said more than 1.5 million children are among those who have fled abroad.

Six in every 10 Ukrainian refugees – 2 113 554 so far – have crossed the Polish border, according to UNHCR’s latest figures.

Many of those heading west from Ukraine into Poland, Hungary and Slovakia then travel further on into other states in Europe’s Schengen open-borders zone.

Paloma Cuchi, the World Health Organization’s representative in Poland, said children had not eaten properly, while a “tremendous number” of senior citizens had been without their medication for days and were arriving with diabetes, blood pressure and other health problems.

UNHCR said 543 308 Ukrainians had made their way into EU member Romania, including a large number who have crossed over from Moldova, wedged between Romania and Ukraine.

The vast majority are thought to have made their way onto other countries further into Europe.

The Moldovan border is the nearest to the major port city of Odessa.

UNHCR said 367 913 Ukrainians had crossed into the non-EU state, one of the poorest in Europe. Most transit through the small nation, en route westwards to Romania and beyond.

The number of Ukrainian refugees who have crossed into Hungary has reached 317 863, UNHCR said.

A quarter of a million people have made it across Ukraine’s shortest border into Slovakia, the UNHCR said, at 253 592 Ukrainian refugees.

Some 252,376 refugees have sought shelter in Russia since the invasion began.

In addition, UNHCR said 113 000 people had crossed into Russia from the separatist-held pro-Russian regions of Donetsk and Lugansk in eastern Ukraine between 21 and 23 February.

And 4 308 refugees have made it north to Belarus, UNHCR says.