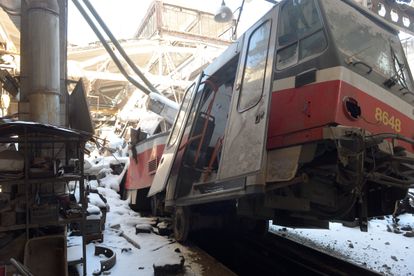 Here are the latest developments in Russia’s war in Ukraine:

Russian forces advance ever closer to the capital from the north, west and northeast. Russian strikes also destroy an airport in the town of Vasylkiv, south of the city.

Presidential adviser Mykhailo Podolyak says Kyiv is already effectively “under siege” as the army and volunteers prepare to defend the city, street by street.

A mosque housing 80 civilians, including some Turkish nationals is shelled in the besieged southern port of Mariupol, Ukraine says, without specifying when.

No immediate figures for casualties are available.

A cancer treatment hospital and an eye clinic come under fire in the city of Mykolaiv, near the strategic Black Sea port of Odessa, an AFP reporter witnesses. There are no reports of casualties.

Ukrainian lawmakers say Russian soldiers have abducted the mayor of the southern city of Melitopol, Ivan Fedorov.  A senior official publishes a video showing soldiers escorting a man from a building, his head apparently covered in a black bag. Ukrainian President Volodymyr Zelensky asks France and Germany to help secure his release.

Ukraine says it will again attempt to evacuate civilians from Mariupol, where residents have been trapped without running water and power for 11 days and there are reports of people starving.

The mayor says more than 1,500 civilians have been killed. Corpses are lying uncollected in the streets.

Washington announces a ban on Russian seafood, vodka and diamonds, and along with the European Union, bans exports of luxury goods to Russia.

The head of Russian space agency Roscosmos warns that Western sanctions could cause the International Space Station to crash.

Dmitry Rogozin says the sanctions are affecting supplies to the Russian part of the station, which corrects the station’s orbit.

The Premier League board disqualifies Roman Abramovich as a director of Chelsea Football Club after the Russian billionaire was placed under Western sanctions.

Abramovich has already announced his intention to sell the club.

US President Joe Biden again rules out any direct intervention by the United States to halt Russia’s invasion of Ukraine, warning that such conflict pitting the NATO alliance against the Kremlin “is World War III”.

The Kremlin says Syrian fighters can fight for Russia in Ukraine after President Vladimir Putin backs plans to draft in 16,000 volunteers, mostly from the Middle East.

The UN warns Meta could be encouraging hate speech.

More than two and a half million people have fled the “senseless war” in Ukraine, the UN says — more than half to Poland.