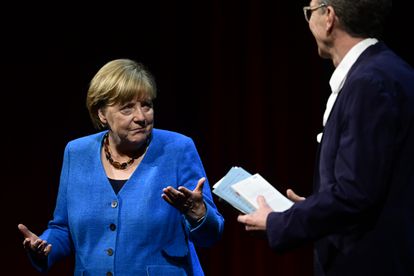 Former German chancellor Angela Merkel on Tuesday defended her years-long policy of detente towards Moscow, saying she had “nothing to apologise for” even as the Ukraine war casts a pall on her legacy.

In her first major interview since stepping down six months ago, Merkel insisted she had not been naive in her dealings with Russian President Vladimir Putin.

“Diplomacy isn’t wrong just because it hasn’t worked,” the 67-year-old said on stage in a Berlin theatre, in an interview broadcast on the Phoenix news channel.

She recalled her support for economic sanctions against Russia over its 2014 annexation of Crimea, and the German-French efforts to keep the Minsk peace process for Ukraine alive.

“I don’t have to blame myself for not trying hard enough,”

“I don’t see that I have to say ‘that was wrong’ and that’s why I have nothing to apologise for.”

The veteran leader, who frequently met with Putin during her 16 years in power and championed a commerce-driven, pragmatic approach towards Moscow, said the February 24 invasion of Ukraine had marked a “turning point”.

There was “no justification whatsoever” for the “brutal” and illegal war of aggression, she said, adding that Putin had made “a big mistake”.

“He wants to destroy Europe,” she warned. “It’s very important for the European Union to stick together now.”

But she batted away criticism that she had been wrong to block Ukraine from joining NATO in 2008, saying it was not ready then and she wanted to avoid “further escalation” with Putin, who was already seething about the military alliance’s perceived eastward expansion.

She also insisted that the 2014-2015 Minsk peace pacts, which now lie in tatters, were at the time seen as the best bet to end the fighting in eastern Ukraine between pro-Russian separatists and Ukrainian soldiers.

The peace process “brought some calm” that gave Ukraine an extra seven years to develop as a democracy and strengthen its military, she said, in a nod to Kyiv’s much praised resistance against the invading Russian troops.

“The courage and passion with which they are fighting for their country is very impressive,” Merkel said, adding she had “the highest respect” for Ukrainian President Volodymyr Zelensky.

But Merkel insisted there was no way to avoid dealing with Putin because Russia, like China, was too big to ignore.

“We have to find a way to co-exist despite all our differences,” she said.

Confronted with criticism of the “change through trade” policy pushed by successive German governments, Merkel said she was never under the illusion that closer trade links would spur democratic reforms in Russia.

“I never thought Putin would change through trade,” she said. But in the absence of a political rapprochement, “having some economic ties makes sense”.

Germany became hugely reliant on Russian energy imports on Merkel’s watch, and she long irked Western allies with her backing for the controversial Nord Stream 2 pipeline that was to double Russian gas deliveries to Germany.

The project was shelved by current Chancellor Olaf Scholz in late February over Russia’s aggression, and Europe’s top economy is now joining EU partners in a race to wean itself off Russian oil, gas and coal.

In another major reversal, Scholz has pledged to invest 100 billion euros ($107 billion) in modernising Germany’s military, seen as chronically underfunded during the Merkel era.

Merkel voiced support for her successor’s decisions, saying strength was “the only language Putin understands”.

During the interview, Merkel — who remains hugely popular in Germany — also offered a rare glimpse into her private life since retiring, spending time on her own on the Baltic Sea coast, taking walks and catching up on her reading.

After 30 years in politics, Merkel said she was enjoying not having to rush from appointment to appointment.

“Personally, I’m doing well,” she told the audience, even if she felt sombre about the war in Ukraine, “like so many people”.

“I had imagined my time after leaving office a bit differently,”