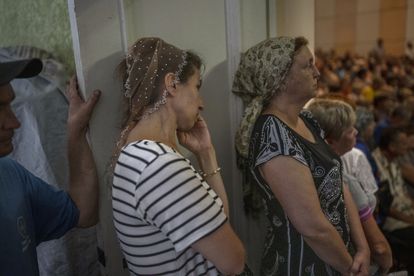 People attend a service in a church in Donbass region on 7 August, 2022, amid Russian invasion of Ukraine. Photo: Bulent KILIC / AFP

People attend a service in a church in Donbass region on 7 August, 2022, amid Russian invasion of Ukraine. Photo: Bulent KILIC / AFP

“We fully stand by our findings,” but stressed “nothing we documented Ukrainian forces doing in any way justifies Russian violations.”

Amnesty sparked outrage in Ukraine with the publication of a report on Thursday that accused the military of endangering civilians by establishing bases in schools and hospitals, and launching counter-attacks from heavily populated areas.

President Volodymyr Zelensky said the group had tried to “shift the responsibility from the aggressor to the victim”.

Amnesty’s report listed incidents in which Ukrainian forces appeared to have exposed civilians to danger in 19 towns and villages in the Kharkiv, Donbas and Mykolaiv regions.

In its statement Sunday, the rights group refused to back down on that assessment.

It “found instances where Ukrainian forces had located themselves right next to where civilians were living, thereby potentially putting them at risk from incoming Russian fire”.

“We made this assessment based on the rules of international humanitarian law, which require all parties to a conflict to avoid locating, to the maximum extent feasible, military objectives within or near densely populated areas.”

Nevertheless, Amnesty recognised the scale of reaction its report had triggered.

“Amnesty International deeply regrets the distress and anger that our press release on the Ukrainian military’s fighting tactics has caused,”

Since Russia invaded in February, Amnesty said it had interviewed hundreds of Ukrainian victims “whose stories illuminate the brutal reality of Russia’s war of aggression”.

“We have challenged the world to demonstrate its solidarity with Ukrainians through concrete action, and we will continue to do so.”