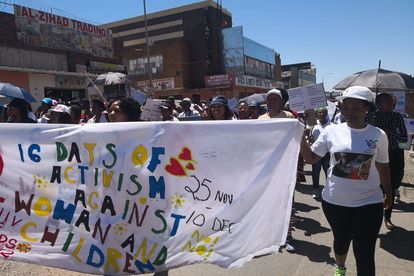 Activists against gender-based violence walk the streets of Germiston in solidarity with victims and to raise awareness. Image supplied

Activists against gender-based violence walk the streets of Germiston in solidarity with victims and to raise awareness. Image supplied

The 16 Days of Activism fro No Violence Against Women and Children campaign will be taking place from 25 November to 10 December 2019.

This year the South African government will convene a series of dialogues on violence against women and children to focus on the problem, discuss the causes and to find appropriate solutions.

The importance of the campaign comes during a time in South Africa where the severity of gender-based violence has become a harsh reality for many. Earlier this year the country was shocked after hearing about the rape and murder of the University of Cape Town media and film studies student Uyinene Mrwetyana and the murder of University of the Western Cape student Jesse Hess (among many others).

It was previously reported that gender-based violence in South Africa had reached “alarming levels”. This, according to Human rights’ group Amnesty International:

The organisation’s executive director for South Africa, Shenilla Mohamed, made the statement in response to a speech given earlier by president Cyril Ramaphosa in which he addressed the country’s gender-based violence (GBV) and femicide rates:

“Gender-based violence has reached undeniably alarming levels in South Africa. It is unacceptable that women feel they have to watch what they wear in public and be careful about where they are seen socialising, for fear that they may face violent reprisals including rape or even death. The time for sloganeering and politicking has passed. President Cyril Ramaphosa must now translate into action his vow that ‘enough is enough’. It’s nothing short of a national emergency that femicide and rape rates are increasing countrywide, and the government must act decisively to tackle these issues.”

The objectives of the SA government’s 16 Days Campaign are to:

The 16 Days Campaign is not only a matter of importance in South Africa but the world.

The 16 Days of Activism against Gender-Based Violence is, in general, the International Day for the elimination of violence against women. It was initially started by activists at the inaugural Women’s Global Leadership Institute in 1991 and continues to be coordinated each year by the Center for Women’s Global Leadership. It is used as an organizing strategy by individuals and organizations around the world to call for the prevention and elimination of violence against women and girls.

In support of this civil society initiative, the United Nations Secretary-General’s UNiTE by 2030 to End Violence against Women campaign (UNiTE campaign) calls for global actions to increase awareness, galvanize advocacy efforts, and share knowledge and innovations.

This year, the UNiTE campaign will mark the 16 Days of Activism under the theme, “Orange the World: Generation Equality Stands against Rape!”