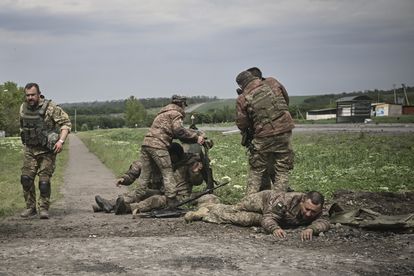 Ukrainian servicemen assist their comrades not far from the frontline in the eastern Ukrainian region of Donbas, on 21 May, 2022. On 3 June, war in Ukraine marked 100 days. Photo: – / AFP

Ukrainian servicemen assist their comrades not far from the frontline in the eastern Ukrainian region of Donbas, on 21 May, 2022. On 3 June, war in Ukraine marked 100 days. Photo: – / AFP

The United Nations said Friday there would be no victor from Russia’s invasion of Ukraine as the conflict entered its 100th day and Moscow’s forces pressed deeper into the eastern Donbas region.

“This war has and will have no winner. Rather, we have witnessed for 100 days what is lost: lives, homes, jobs and prospects,”

The milestone came as Kyiv announced Moscow was now in control of a fifth of Ukrainian territory, including Crimea and parts of Donbas seized in 2014.

Russia’s invasion, which began on 24 February, saw Moscow’s troops first attempt a blitz on Kyiv before relinquishing control of area around the capital and Ukraine’s second city Kharkiv in the north east.

The have made steady gain in the south and east, however.

“This war has taken an unacceptable toll on people and engulfed virtually all aspects of civilian life,” Awad said.

“In just over three months, nearly 14 million Ukrainians have been forced to flee their homes, the majority women and children,”

The UN said the group was working to limit the war’s “devastating impact on food security by seeking to unblock critical grain and commodity trade.”

Cereal prices have surged because of a slump in exports from Ukraine, sharpening the impact of conflict and climate change and sparking fears of social unrest.

“We need peace. The war must end now,”