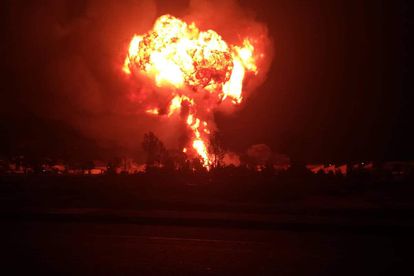 It’s understood that a gas tanker at a nearby gas station has exploded in the Western Cape town of Worcester early on Wednesday morning. Preliminary reports suggest that the vehicle hit an electricity pole, causing a massive fireball in the sky – although details remain sketchy at this point.

We’ve been told that the truck carrying the fuel has overturned in the accident. Thankfully, no fatalities have been reported – but firefighters trying to subdue the flames have been injured The scale of this blaze is pretty large, as we can see from some of the more dramatic photos of the incident:

Apparently there was explosion at or near Agri petrol station in High Street in Worcester. pic.twitter.com/MD1i4Ii2Zx

In one of the videos, we see that the incident has taken place close to an Agri petrol station. The people behind the camera point out that a truck carrying the fuel is at the centre of the destruction.

What we know about the tanker fire in Worcester

Meanwhile, in another popular viral clip, we also see some drivers perform a u-turn in the road as the inferno intensifies. During a follow-up explosion, a fiery cloud of smoke engulfs the night sky, causing panic for local motorists.

The fire is believed to have spread from the petrol station to some businesses nearby, with other properties going up in flames too. One eyewitness reported that, despite being five kilometres away from the blast zone, they felt their house shake during the explosion.

Worcester is just over 90 minutes drive away from Cape Town, and the town is a popular stop-off for travellers making the long trek up the N1. Police, fire crews and paramedics have all arrived to the tanker fire. The following road closures are currently in place:

The worst-affected area is Church Street, thought to be the epicentre of the blast. The road leads on to the N1, but it has become inaccessible due to the incident and the number of emergency services on the scene.