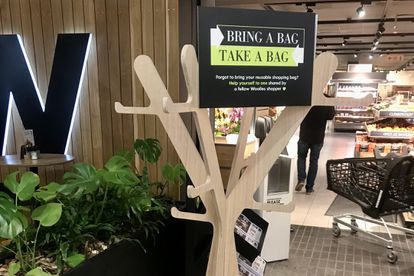 The idea is to give customers the opportunity to drop off their excess reusable bags that are still in good condition for fellow customers – who have forgotten theirs – to use and return thereafter.

“The trial is currently running in our Constantia, Palmyra, St Johns Piazza and Majik Forest stores and should there be a favourable response, we will roll out to more stores upcountry,” the group said.

Woolworths has removed plastic bags from all stores

Meanwhile, as reported by The South African website, Woolworths has confirmed that it has now removed single-use plastic shopping bags at ALL of its food stores in the country.

The announcement marks a key milestone in the South African retailer’s strategy of zero-packaging waste to landfill.

According to BusinessTech, along with dropping all single-use plastic bags at its stores, the Woolworths strategy also includes the phasing out of unnecessary single-use plastics and for all packaging to be reusable and/or recyclable.

Since announcing the strategy, the retailer has also removed single-use plastic straws, utensils, lollipop sticks and cotton bud stems, as well as made packaging improvements.

Have you taken advantage of the ‘bag share’ initiative? Thoughts on the idea? Let us know below!