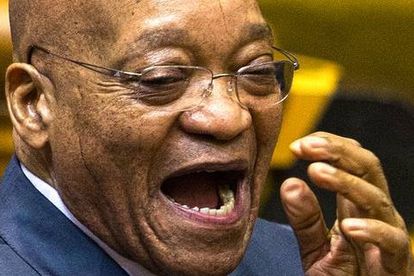 El presidente, who has a history of unproven accusations of sexual harassment against him, said that modern women are too quick to claim harassment when men were merely giving them ‘innocent’ compliments.

The main man’s most recent ‘foot-in-mouth’ statement came as he was addressing journalists at Ntolwane Primary School in Nkandla, KZN, after checking his name of the voter roll.

With him was one of his wives, Tobeka Madiba Zuma and his 8 year-old daughter Nqobile. Chatting to female journo’s, Zuma said: “It’s a pity we live in a white man’s world; you can’t even say ‘Gqezu, Gqezu ntomazane! Nongenazo izinkomo uyayidla inyama’.”

Last-mentioned loosely translated from Zulu means ‘even if you don’t have enough money to pay lobola, you can still get married’.

According to News24, the president added that if men could compliment women as they did in the past, his bodyguards would have given the female journalists compliments. Yeah, it’s called emancipation Mr president… welcome to the 21st century.

“But when men compliment you innocently, you say it’s harassment. You will miss out on good men and marriage,” said Zuma, giving his signature cackle…

Have a look as Zuma puts his foot in it… again: