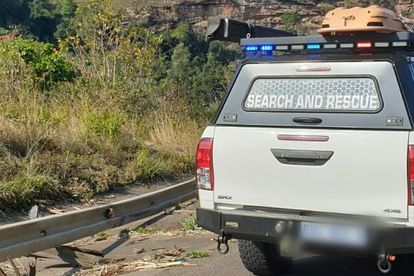 A woman was rescued on Thursday when her car careened off the N3 roadway and down an embankment near Giba Gorge.

A spokesperson for Emer-G-Med paramedics, Kyle Van Reenen, said paramedics responded to the N3 Durban bound, in the vicinity of Giba Gorge, after a vehicle was seen to careen off the roadway and down an embankment.

“Emergency services found the vehicle approximately thirty meters from the roadway with the female motorist seated inside.”

He said the woman was brought back to the roadway using a specialist rope access system.

Once the woman was rescued she was taken by ambulance to a nearby hospital for further care and assessment.

Meanwhile in an unrelated accident, a mini-bus taxi driver sustained serious injuries after a tree fell over and crushed his taxi in Bezuidenhout Valley in Johannesburg.

THE DRIVER WAS ENTRAPPED IN THE FRONT CAB

Netcare 911 emergency services said the driver was heavily entrapped in the front cab.

Reports indicate that a tree had fallen over during a storm crushing a taxi in the process.

“When medics arrived on the scene, they found the mini-bus taxi driver having sustained serious injuries heavily entrapped in the front cab.”