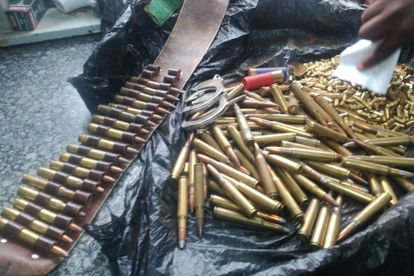 The woman was found with a firearm and was caught trying to sell scores of ammunition. PHOTO: SAPS

The woman was found with a firearm and was caught trying to sell scores of ammunition. PHOTO: SAPS

A woman was caught in the act of selling scores of live ammunition and was also found in possession of handcuffs.

The 25-year-old was arrested by the South African Police Service in Bekkersdal. This came after residents in the community alerted the police, said police.

WOMAN CAUGHT WITH FIREARM AND HANDCUFFS

The young woman was arrested on Friday in the Mandela section of Bekkersdal, police spokesperson Sergeant Linkie Lefakane said.

“Community members of Mandela section… reportedly caught the woman in the act of selling live ammunition and alerted the police.”

The police immediately responded. They recovered an unlicenced firearm, ammunition and hand-cuffs.

“Further investigation will confirm the suspect’s residency status in the country,” said Lefakane.

The arrested firearm dealer is expected to appear before the Westonaria Magistrate’s Court soon.

Police however encourage community members to continue working with the police in the fight against crime.

Police in Eldorado Park traced suspects behind the recent shooting incident in the area.

The police, along with the Soweto Tactical Response Team, followed up on information regarding the suspects’ whereabouts on Thursday.

“The members proceeded to the provided address and upon arrival, conducted a search on the premises,” said police spokesperson Colonel Dimakatso Sello.

The search led to the arrest of five men aged between 19 and 24 years. One of the suspects was found in possession of unlicenced firearm with sixteen live ammunitions.

“Two more suspects were later arrested for other separate cases of murder. All suspects are expected to appear before the respective Magistrate’s Court soon.

Police in the province have been working together with communities to curb crime, especially involving illegal firearms.

Gauteng police commissioner Lieutenant General Elias Mawela expressed his gratitude to the communities for their efforts in sharing information with the police.

“These successes could not have been possible without the integrated efforts of all parties involved,” said Mawela.