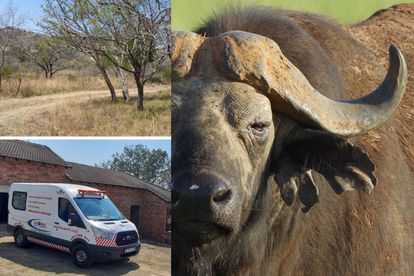 A woman in her 50s was attacked by a buffalo at Game Reserve in Nelspruit on Monday.

THE WOMAN WAS ATTACKED ON MONDAY MORNING

According to Lifemed Ambulance Service, the woman was attacked by a buffalo in the Mthethomusha Game Reserve, Nelspruit.

“Paramedics were called around 09:00 on Monday to reports of a woman in her 50s being attacked by a buffalo.

“They treated the woman for bruises and abrasions before taking her to the Nelspruit Mediclinic Hospital in a stable condition.”

“Our paramedics did a fantastic job in getting to this lady and providing the best possible care. We wish the patient a speedy recovery.”

Earlier this year, a lion bit off a man’s finger who was petting him through the fence of an enclosure at a zoo, with everyone speculating whether it happened in South Africa.

THE HORRIFYING MOMENT IS CAUGHT ON CAMERA

This is because the man is heard screaming the well know and loved South African swearword – F@k! several times in the video.

The man puts his hand inside the lion’s enclosure, reportedly in an effort to put on a show for visitors.

However, the stunt went terribly wrong as the lion ended up biting the man’s finger as he struggled to break free from its jaws.

In a second video, the man is rolling around in agony, clenching his injured skinless finger with his other hand.

It is believed the man lost a piece of his ring finger.

According to a a visitor, who did not want to be named, said the lion bit off the entire top section of his finger, from the first joint.

She told the Jamaica Observer, that around 15 people were watching the horrifying incident.

The woman explained that a tour of the zoo had come to an end and the worker was trying to impress the crowd.

THE MAN WAS TRYING TO IMPRESS THE CROWD

“When it happened, I thought it was a joke,” she said. “I didn’t think it was serious. I didn’t realise the seriousness of it, because it’s their job to put on a show,” she said.

“Obviously, when he fell on the ground everybody realised that it was serious. Everybody started to panic,” she added.

The worker is seen screaming expletives as he wrestles to free his finger from the lion’s mouth, before finally breaking free and falling to the ground.

The visitor said she and other were left stunned after watching the horrifying incident.