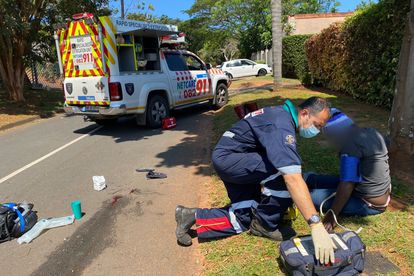 Paramedics said a 30-year-old woman delivering newspapers was attacked and mauled by a pair of Pitbulls in Glen Anil, Durban North on Wednesday.

According to Netcare911 spokesperson Shawn Herbst, they responded to the call at 12H55 on Wednesday afternoon.

“At 12H55 Wednesday afternoon, Netcare 911 responded to a dog bite on Bougainvillea and Honeysuckle Drive in Glen Anil, Durban North.

“Reports from the scene indicate that while delivering newspapers, a 30-year-old female had been mauled by a pair of Pitbulls.”

He said members of the public intervened to free the woman from the dogs.

ALSO READ: A 60-year-old woman fought back against robber, stabbing him in the chest

“When medics arrived on the scene, they found that the woman had sustained multiple dog bites to her lower torso.”

The injured woman was treated on scene by medics and, once stabilised was transported by ambulance to a hospital for further treatment.

Meanwhile earlier this week a 60-year-old woman fought back against a robber who was forcing his way into her house by stabbing him in the chest.

According to  Reaction Unit, SA spokesperson Prem Balram, they received a call from a frantic 60-year-old woman who said she had stabbed a man who had was forcing his way into her home.

He said this happened around 16h00 in Verulam in KwaZulu-Natal on Tuesday.

Barlam said Reaction Officers were dispatched to the property and, on arrival, met with the elderly woman.

“She explained that while watching TV she heard the bottom half of her back door being forced open. Upon investigation she noticed the suspect creeping into her home.

” She grabbed a wooden shelf and assaulted him with it; however, the suspect did not retreat. She then grabbed a kitchen knife and stabbed him in the chest.”