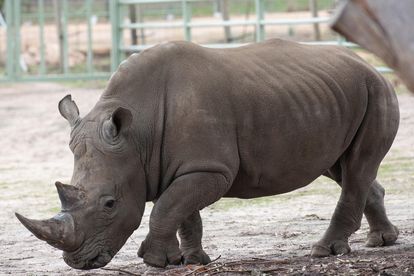 A 45-year-old woman was reportedly injured after a rhino ran over her legs on Wednesday, 10 August. Photo: Stock Image / Pixabay

A 45-year-old woman was reportedly injured after a rhino ran over her legs on Wednesday, 10 August. Photo: Stock Image / Pixabay

A 45-year-old woman was reportedly injured by a rhino on Wednesday, 10 August.

Ezemvelo spokesperson Musa Mntambo said that two rhinoceros were seen outside the Hluhluwe Imfolozi Park (HiP). Mntambo explained that they were waiting for their game capture unit to arrive and recapture the rhinoceroses.

However, a person from the community fired a gun at the rhinos. The animals then ran towards the houses. A woman, who was near her house, attempted to run from one of the rhinos but fell.

Mntambo said that the rhino ran over her, injuring the woman’s legs. She was rushed to a nearby hospital where a doctor confirmed that she had not broken any bones.

“She was run to the hospital where her Dr has reported that she has no broken bone. She will be kept in hospital for two days for observation,”

In other related news, it was previously reported that following news of the increase in rhinoceros poaching in KwaZulu-Natal, opposition parties have made calls for tighter security in the province.

Minister of Forestry, Fisheries and the Environment Barbara Creecy revealed rhino horn poaching statistics showing that in the last six months, 259 rhinos were poached in South Africa. In KZN alone, a whopping 133 rhinoceros were poached since the start of 2022. This is more than triple the amount of 2021 when 33 rhinos were killed in the same period.

DA spokesperson on Economic Development, Tourism and Environmental Affairs in KZN Heinz de Boer said a shortage of game rangers and poor security at some parks resulted in the increase in the poaching of the animal in the province. De Boer stated that the horns were moved directly from KZN to the Mozambique border. Read the full story here.