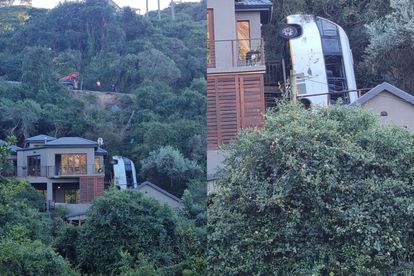 A three-year-old died in a bus crash on Saturday. Photo: ER24.

A three-year-old died in a bus crash on Saturday. Photo: ER24.

A three-year-old toddler died when a bus carrying a local rugby team, staff and supporters went down an embankment in the Wilderness area, Western Cape on Saturday night, 21 May.

According to paramedic service, ER24, it is alleged that the vehicle’s brakes failed. Paramedics arrived at the scene at 18:30 on Saturday night along with the fire department, metro rescue and metro EMS.

The bus was reportedly returning to Wittedrift near Plettenberg Bay after its occupants played a match in Saasveld near George.

“They had apparently taken this road through the back of Wilderness to connect to the N2 as the Saasveld road is closed due to flood damage,” said ER24.

Emergency discovered the bus lying down the embankment, on its side, at an 80-degree angle. It had crashed through the deck of a nearby home.

A three-year-old toddler suffered fatal injuries and was declared dead at the scene by Metro EMS while two men in their 30s were trapped in the bus in a critical condition.

“They required Advanced Life Support interventions and their extraction took a long, combined effort led by Metro Rescue. ER24 transported them both through to George Provincial Hospital for further care,” said the emergency service.

The 34 other injured patients included men, women and children. They were treated and transported to nearby hospitals due to minor injuries.

The police are investigating the accident.

READ: NICD monkeypox update: No cases detected in SA but risk of importation ‘a reality’