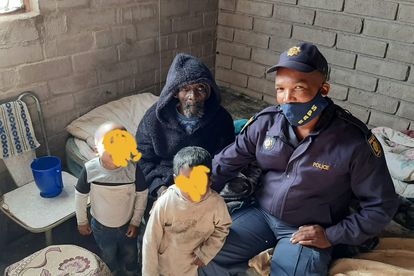 An elderly man and three children were saved from a house on fire in Kakamas. Photo: SAPS.

An elderly man and three children were saved from a house on fire in Kakamas. Photo: SAPS.

An elderly bedridden man and three children were rescued from a house on fire by the Northern Cape police on Saturday, 18 June.

The trio immediately grabbed buckets and fetched water to extinguish the fire. “Quick thinking and heroic action by Reservist Constable Van Wyk in entering the burning house and rescuing the occupants have averted a potentially lethal situation,” said Prins.

The front door was already on fire and van Wyk broke a window to enter the burning home. He carried the elderly man to the window and handed him to the police members outside who carried him to safety.

“At that stage, a young child was heard crying in the house and again Reservist Constable Van Wyk climbed back through the window into the burning house where he looked for and found three children aged 2, 4 and 11 on a bed,” said the police spokesperson.

Van Wyk repeated his heroics and helped the children to safety through the window.

Eventually, the fire was extinguished. The house suffered significant damage. The relatives of the elderly man and children expressed their gratitude to the members for their valiant efforts.