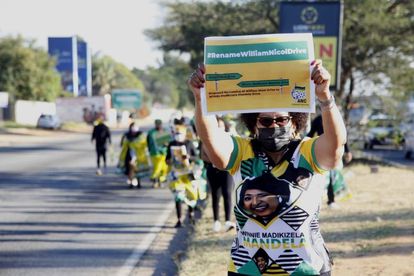 The African National Congress (ANC) in Gauteng, led by Deputy Secretary General Jessie Duarte, took the streets on Monday, 26 April, mobilising in the name of Winnie Madikizela-Mandela. The Johannesburg caucus of the political party is calling for William Nicol Drive in Johannesburg to be renamed after the ANC stalwart.

WILL THERE  BE A WINNIE MADIKIZELA-MANDELA DRIVE?

Duarte and her comrades gathered at the three major intersections on William Nicol Drive at 7:00 on Monday to petition Gauteng communities to support the changing of the name to Winnie Madikizela-Mandela Drive by signing a pledge and an online petition.

The road, which connects northern Johannesburg with the central business district, is currently named after the man who was the administrator of Transvaal during its construction between 1948 and 1958. It is used by tens of thousands of Johannesburg commuters daily.

“In light of transformation, we are in support of this proposed name change, in honour and recognition of our great stalwart Winnie Madikizela-Mandela and her great contribution in the South African political sphere,” said the ANC Joburg Caucus in a statement on 14 April.

In the 14 April statement, the ANC took the opportunity to take shots at the Democratic Alliance (DA). The opposition party launched an online petition opposing the proposed name change.

However, DA Provincial Legislative Member Nico De jager, said the party is not opposed to renaming William Nicol to Winnie Madikizela-Mandela Drive, but the timing is an issue.

“All we are saying is that the right time to do that, especially with the cost implications on the economy with the change of a name when there is so much more that can be done with that money,” said De Jager to the SABC.

The ANC called the DA’s opposition to the name change “backward” and said the opposition party does not believe in transformation in the “new” South Africa.

“Their project as a political party is to ensure that all the remnants of apartheid and its painful past must linger around us,” said the ANC.