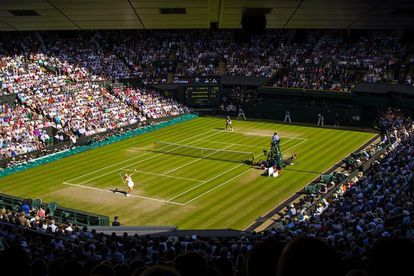 Whip out the strawberries and cream, it’s time for a spot of tennis in South West London. Wimbledon 2018 officially gets underway on Monday and we’re reaching fever pitch for this one.

Defending champion Roger Federer – who, may we remind you, has a little bit of Mzansi in him – will start the defence of his title against Serbia’s Dusan Lajovic. In fact, it’s not just the Swiss Maestro we’ll have an invested interest in…

When does Kevin Anderson play at Wimbledon 2018?

South Africa’s own Kevin Anderson is seeded eighth, his highest ever ranking ahead of the tournament. It comes off the back of an incredible year for the 32-year-old, who has won the New York Open and reached the US Open final in the last 12 months.

The other South African representation is in the men’s doubles where Raven Klaasen and his New Zealand partner Michael Venus are ranked 13th.

But can these guys emulate the greatest South African efforts ever seen at SW17? We’re taking a quick look at the local legends of the game who flew the flag higher than anyone else at the prestigious competition.

Has a South African ever won Wimbledon?

Not in a singles competition, no. But there is one Saffa who has walked away with a trophy from Centre Court. Durban-born Kevin Curren teamed up with Anne Smith of the USA to claim the mixed doubles crown back in 1982.

South Africans who have reached a Wimbledon final

He’s described it as both the most memorable and disappointing day of his life. Again, Kevin Curren had powered his way to a final on the hallowed turf, three years after his success with Smith.

Then, there’s Brian Ivan Cobb Norton. “The Notorious BICN” (not his actual nickname, but should have been) was born on Robben Island in 1899. Twenty-two years later, he reached a Wimbledon final.

Though he lost to Bill Tilden, he reached the dizzy heights of being ranked the seventh-best tennis player in the world. Norton died in 1956 at his California residence.

Only one South African woman has ever made a Wimbledon final. Sandra Reynolds reached the tournament-decider in 1960, where she lost to Brazil’s Maria Bueno.

If Kevin Anderson could go the distance, he’ll be the first ever South African to win Wimbledon. With Andy Murray dropping out and the Joburger’s stock steadily on the rise, it really isn’t mission impossible for our guy.