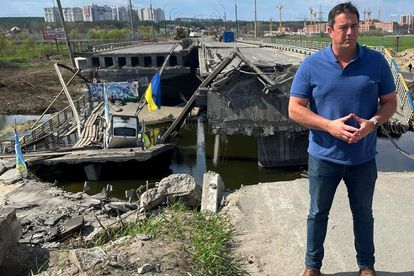 DA Leader John Steenhuisen has slammed critics of his trip to war-torn Ukraine as “one-dimensional”, saying that the destruction and violence he is currently seeing up close and personal is going to have a major impact on South Africa’s food security and cost of living.

Steenhuisen embarked on a six-day tour of various regions of Ukraine this week, and told The South African on Tuesday morning that at the core of foreign policy and peace-making efforts is first hand experience.

“I get frustrated when there’s this one dimensional view. We live in a global world and the interconnectedness of the world means that the disruptions in a region so important to Africa is going to have repercussions on our economy and on the well-being of our people.”

Ahead of meetings with various members of Ukrainian local government and members of the country’s Parliament, Steenhuisen finds himself in Kyiv, where he says that while the destruction caused by invading Russian forces is staggering, citizens are continuing to go about their lives as ordinarily as they are able to.

“As soon as we advanced onto Kyiv, you start to see blown-up tanks on the side of the road and the huge damage that’s been done to hospitals, homes, garages, warehouses, etc. On the outskirts where the fighting took place, you can see homes that have been shelled,” he said.

“In the city, there are massive fortifications pretty much everywhere – metro stations have been turned into bomb shelters etc. People are still going about their daily lives, the restaurants are still pretty much all open and there are air raid sirens that go off if a threat is looming. There seems to be a kind of fragile hiatus on the go, but there is still fear that the conflict will resume again any minute,” see said.

Steenhuisen will meet with former Ukrainian President Viktor Yushchenko before heading out to  the city of Bucha where there are alleged to have been “huge human rights violations” carried out by occupying Russian forces. He will also meet with the Ukrainian foreign relations committee and European Integration committee, as well as the Mayor of Kyiv.

“It’s in a massive state of flux though, at any moment something else could happen. It’s quite surreal,” he said, adding that any potential meeting with President Volodymyr Zelensky would only materialise if security services deem one appropriate.

Steenhuisen: ‘Ukraine conflict will have massive impact back home’

Members of the “Twiteratti” – as Steenhuisen calls detractors of his decision to head to Ukraine this week – are missing the bigger bigger picture, he suggested. Many social media users balked at the DA leader’s decision to fly out to Ukraine while areas in his own country are undergoing violence tantamount to warfare.

“This is what frustrates me about the Twiteratti, who are asking ‘why am I here when there’s all these things going on at home’. Yes, but you can’t be one-dimensional as a politician. Just because you’re picking up an issue in a region that’s going to have an impact on us at at home doesn’t mean you don’t care about the issues at home,” he said.

“I’ve spent the last three to four weeks on the road in KZN with the flooding, I was in rural Eastern Cape a few days ago highlighting issues of poverty and inequality and unemployment, I’ve been to visit Butterworth…. I was in KZN following the riots there last year.”

Steenhuisen said that the ANC government continues to stand on the wrong side of history with regard to the conflict, and slated the notion that South Africa holds a neutral position on the issue.

“We are on the wrong side of history, and South Africa is trying to hide behind this veneer of neutrality, but there is o neutrality – you can’t say you’re neutral when you go and celebrate at the Russian embassy on the night of the first invasion, or with people like Cameron Dugmore expressing messages of solidarity with the Russians. You’ve invaded a foreign nation, and this is causing huge damage to the world,” he said.

Why has South Africa been so hesitant to condemn the actions of Vladimir Putin’s Russia? It all comes down to “elite capture”, says Steenhuisen.

“The biggest contributor to the ANC in the past few years is a Putin linked Oligarch. There is elite capture in terms of power deals, security deals etc. I think that the elite in government are reluctant to cut any potential business opportunities with Russia. That is to my mind what lies at the heart of SA’s inability to set out its own store in terms of the values it ostensibly sets out in its own country.”

He outlined the threat to South Africa’s food security, saying that fertiliser prices have climbed 300%, while important exports from the warring nations have effectively ceased.  “It’s impossible for Ukraine to get products out due to the blockading of ports, and you’re going to have sanctions on Russia in place,” he said.

“I’m disappointed, South Africa should know better. Having to throw off the yolk of colonialism and imperialism itself, and having lived under a grim that suppressed freedom of speech and personal liberties and democracy, why on earth would we be quiet when those very values that are enshrined in our constitution are being overridden?”

“Surely the driving force of your foreign policy should be to impress on others the values of your own constitution – freedom, democracy and the rule of law.”