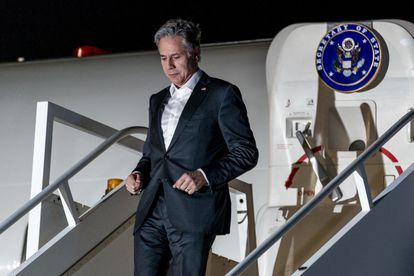 US Secretary of State Antony Blinken landed in South Africa on Sunday to kick off a three-nation visit aimed at countering Russian influence on the  continent.

South Africa, a leader in the developing world, has  remained neutral in the Ukraine war, refusing to join Western calls to condemn Moscow, which had opposed  apartheid before the end of white minority rule in 1994.

Blinken will hold talks on Monday with South African counterpart Naledi Pandor and also make an announcement on the US government’s new Africa strategy, Pretoria said in a statement.

They will “discuss ongoing and recent developments relating to the global geopolitical situation,”

The State Department last month called African countries “geostrategic players and critical partners on the most pressing issues of our day, from promoting an open and stable international system, to tackling the effects of climate change, food insecurity and global pandemics to shaping our technological and economic futures”.

Blinken who is on his second trip to Africa since his appointment early last year, is due to proceed to the Democratic Republic of Congo and Rwanda later this week.

His visit to DR Congo is aimed at boosting support for sub-Saharan Africa’s biggest country which battling to turn the page on decades of conflict.

He winds up the tour in Rwanda, which has seen a flare-up in tensions with DR Congo after it accused its neighbour to the east of backing M23 rebels, a charge Kigali denies.