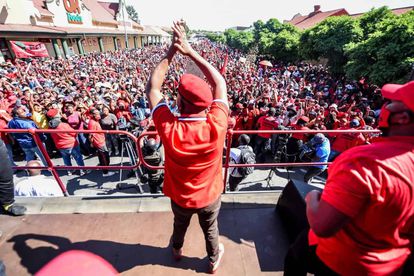 A political blame-game has erupted on Friday, after a farm murder was reported in the town of Hennenman. The peace in this rural location was shattered when a 56-year-old farmer was shot dead, and his son stabbed in the back several times. Now, the FF Plus leader in Free State has accused the EFF of ‘inciting the violence’.

Police earlier confirmed that they are searching for the perpetrators behind a heinous farm murder in Free State – just weeks after a similar crime sparked racially charged confrontations in the province. This attack took place in the quiet town of Hennenman, in the Lejweleputswa District Municipality, and a manhunt has since been launched.

But Jan van Niekerk believes that some responsibility rests with the Red Berets. Issuing a statement earlier this afternoon, the provincial representative for South Africa’s fifth-largest political party referenced the EFF’s recent Parliamentary motions, and their contentious appearances in Senekal last month.

FF Plus slam EFF for ‘incitement’

Van Niekerk is certain that Julius Malema, his colleagues and supporters ‘must be held accountable’ for whipping up racial hatred in this part of the country. We are awaiting an EFF response to these rather serious allegations:

“The fact that this cruel farm murder occurred within just a few hours after the EFF tabled a motion about farmers treating their workers badly is not a coincidence. The EFF makes irresponsible statements in a desperate attempt to remain relevant. Statements, like ‘we are coming for your farms’, by Members of Parliament only fan the flames.”

“The high incidence of and extreme cruelty associated with farm attacks point to hate and it certainly relates to the irresponsible statements by leaders of some parties, like the EFF. Agricultural communities have had it with the cruel attacks on farms. Political leaders who demonise farmers must be held accountable for the hate that they incite”