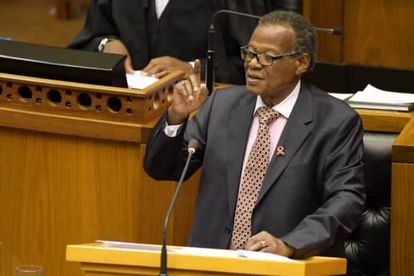 Prince Mangosuthu Buthelezi during the debate on President Cyril Ramaphosa’s state of the nation address at the National Assembly on February 19, 2018 in Cape Town, South Africa. Ramaphosa delivered his maiden SONA on Friday, just a day after being elected unopposed and sworn in after Jacob Zuma’s resignation. (Photo by Gallo Images / Jeffrey Abrahams)

Prince Mangosuthu Buthelezi during the debate on President Cyril Ramaphosa’s state of the nation address at the National Assembly on February 19, 2018 in Cape Town, South Africa. Ramaphosa delivered his maiden SONA on Friday, just a day after being elected unopposed and sworn in after Jacob Zuma’s resignation. (Photo by Gallo Images / Jeffrey Abrahams)

Gerhard Maré, University of KwaZulu-Natal, first published on The Conversation.

Mangosuthu Gatsha Buthelezi announced his retirement as president of the Inkatha Freedom Party (IFP) in late October 2017. The 90-year-old South African politician said he would not stand again for leadership of the organisation he founded in the mid-1970s.

However, the Inkatha Freedom Party congress – where his successor was to be elected – has been postponed. It’s just the latest twist in Buthelezi’s long political life, which provides a fascinating thread through the past 70 years in South Africa’s tumultuous history.

His career as a politician began in 1953 when he was called by his clan to lead it as inkosi(chief).

Subsequently, he came to head the KwaZulu “bantustan”, homeland of the Zulu. The apartheid government divided mainly rural parts of South Africa into 10 ethnically based homelands. This segregationist policy aimed to remove black people from urban areas of South Africa, leaving these areas to whites only.

Buthelezi formed and reigned as president of Inkatha, a self-styled “cultural liberation movement”, from 1975. It was renamed the Inkatha Freedom Party in the early 1990s. He served for a decade in the cabinet of the Government of National Unity after Nelson Mandela became president in 1994.

Probably the most important aspect of his career was a problematic tension which was expressed in his actions and their consequences: between ethnicity and nationalism, between region and country, between Zulu and South African identity.

Historian Sheila Gastrow has written that his “tribal loyalties and focus on ethnic interests over national unity” led to,

a virtual civil war between his Zulu loyalist supporters and ANC members in KwaZulu-Natal.

More than 15 000 people died in these conflicts. This horrific period was abetted by the apartheid state – and served it – during the decade leading to 1994. In its final report the Truth and Reconciliation Commission accused Buthelezi of being a major perpetrator of violence and human rights abuses during the apartheid era.

Buthelezi vehemently denied this and in 2002 even tried to interdict the Truth Commission from releasing its final report.

Buthelezi was born on 27 August 1928 to parents who were located firmly within Zulu traditional authority. Belonging to one of the region’s most powerful cultural groups – with assertions to royal blood through his mother, Princess Magogo – Buthelezi grounded his first claims for leadership in the ethnic “camp”.

But he also straddled the nationalist “camp”. In 1950, the then law student was evicted from the University of Fort Hare during anti-government protests. After completing his studies, he chose the position of chief of the Buthelezi clan rather than a route into law.

Buthelezi constructed himself as the heir to Albert Luthuli – a leader who sat easily with both his ethnic role as a Zulu “chief” and a national role as ANC president.

Buthelezi frequently referred to a meeting he had with Luthuli. There, the elder statesman “hung his mantle” on Buthelezi, both as Zulu and as ANC member. But in 1970 Buthelezi was elected to the headship of the Zulu Territorial Authority. That was the first step towards a Zulu “homeland” within the apartheid grand scheme.

Once in power, Buthelezi contested “separate development”, resisting formal bantustan “independence”. His leadership, however, demonstrated the opening fissure between ethnic and national political struggle for the next 25 years.

Buthelezi claimed Inkatha was a revival of the ANC as an internal movement, and adopted the same colours. He alleged it was a strategy of undermining apartheid “from within”; these claims drew the ire of the exiled ANC leadership, which believed, correctly, that Buthelezi had his own aims and distinct power base.

The vicious war between these rival interpretations of nationhood and political expression divided people and families. It opened unexpected opportunities for the apartheid state to drive another wedge into opposition struggles.

Buthelezi’s contestation against apartheid was expressed in another way too. He sought to replace the bantustan fragmentation with a post-apartheid federal system.

In key ways, Buthelezi anticipated how ANC rule would develop post-democracy. One early indication of this continuity was the easy migration of the Zulu king, Goodwill Zwelithini, from a stalwart of Inkatha to the welcoming arms of the ANC government.

The contradictions that formed Buthelezi’s challenges as an anti-apartheid leader have continued in a number of unresolved issues. Chief among them are the Ingonyama Trust debacle and the unresolved status of land, custom and authority. The Ingonyama Trust was the outcome of a deal between apartheid’s last ruling party, the National Party, and the IFP during the dying days of white rule.

The homeland system was about to be dismantled, and the Trust, with King Goodwill Zwelithini as its sole trustee, was established to manage land then falling under the bantustan government of KwaZulu. The Trust, which is now responsible for managing some 2.8 million hectares of land in KwaZulu-Natal, has been criticised for threatening rural people’s rights.

A belligerent Zwelithini rejected recent calls for the Trust to be dismantled, and called on Zulus to take up arms to defend the land.

The material thread throughout Buthelezi’s life as both an ethnic and a national politician has been land and its relationship to political claim-making. So there is deep irony in the fact that Buthelezi was, in the 1980s, castigated and threatened with death for standing on culture-based land policies. Today many parties use these policies to mobilise public opinion and support.

It seems to be effective, with signs that the Inkatha Freedom Party is regaining support during a time of extreme political contestation in KwaZulu-Natal.

Buthelezi carries extensive accountability for the sectarianism that characterised politics before 1994. But the contradictions and responsibilities go beyond this fascinating figure. His retirement will certainly not bring an end to ethnic “traditionalism”.