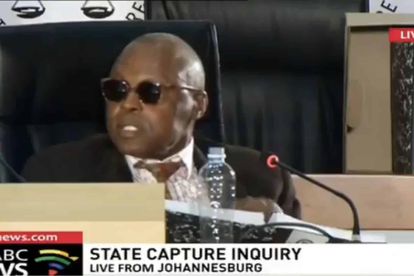 In what could be described as one of the most laughable testimonies to ever be heard at the State Capture Inquiry, Vuyisile Ndzeku had tongues wagging on social media over his ‘failure’ to remember receiving R2.5 million from work done with South African Airways (SAA).

Ndzeku, the director of JM Aviation, a company that did work for the troubled state owned airline, appeared before the commission on Wednesday, 26 August 2020, to answer questions surrounding a questionable R1 billion contract.

At some point during proceedings, he sat sluggishly on his chair and sported sunglasses, which some could perceive as a sign of total arrogance and disregard for the process.

The ground-handling contract was between SAA and Swissport SA. After it was signed, a payment of R28 million was made from the company’s account into JM Aviation. Ndzeku subsequently received R2.5 million from that deal – which was one of the main focuses of his testimony.

He continued denying receiving the money, despite Hofmeyr showing bank statements which proved the money had been paid into his account.

“I do not know what it is was for and what I did. I would have to know but it has been a long time”, he said.

His daughters and wife also had share in JM Aviation.

The businessman has taken aim at the commission, accusing it of being racist and ignoring allegations faced by white executives. He even made reference to former SAA chair Dudu Myeni, who was accused of helping drive the carrier to the ground.

“There are people like Dudu Myeni which … today everyone is making a fool about them, these people they found SAA dead. There is a gentleman called Andrew Coleman, he took a lot of money at SAA … nobody is saying anything about that.”

Hofmeyr: ‘Ndzeku is a dishonest witness’

The evidence leader did not hold back and accused Ndzeku of lying to the commission and changing his version of events several times throughout his testimony.

“Mr Ndzeku, we will submit to the chair in due course that you have been a dishonest witness. That you have changed your version on numerous occasions”, Hofmeyr said.

In response, Ndzeku denied being lying to the commission saying he had simply forgotten.