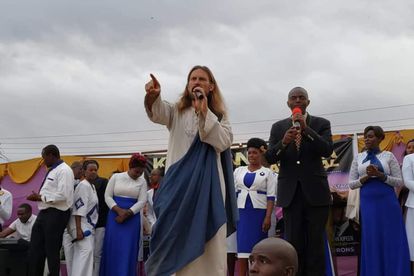 Michael Job, the man behind the ‘fake jesus’ outcry in Kenya this week, has taken to social media to explain his side of the story.

Fake news of a ‘fake Jesus’

South Africans and Kenyans were up in arms after news articles, pictures, and video of a man apparently pretending to be the second coming of Jesus parading through the streets of Kenya began to go viral.

However, it has since been revealed that the claims were nothing but fake news and not something he ever said himself.

“Hey guys! Just to let you know there has been many false ‘fake news’ reports here in Kenya about me. I just did nine days of crusades in Ongata Rongai, Kitengela, and Kiserian Kenya where many people were saved and healed,” he wrote on Facebook.

“I dressed up as Jesus during these crusades my awesome friends and I performed many plays focusing on the life of Christ. Some people, known as ‘internet trolls’, have made false reports about me claiming to be Jesus, Jesus’ second coming starting in Kenya, me being found and worshipped in churches, and me being deported with pastors from the country, all of which are ‘fake news’.”

No to fake news. This guy never claimed to be Jesus, no church claimed to have invited Jesus. This guy was advertised as Michael Job from USA. He is an actor &an evangelist. He is even there on Facebook asking for prayers for his crusades. The Jesus claims are fake, bye bye. pic.twitter.com/0w2Eq2DAPc

Who is Michael Job?

The misinformation around the topic is rife with plenty of websites trying to cash in on the potential hysteria and anger of claiming the second coming of Jesus Christ is upon us.

The thing is, though, Job has never claimed to actually be Jesus, was invited there by local evangelists, and is an actor that has played the role of Jesus on several occasions, so there really is nothing sinister about this at all.

“I have gotten many messages and just wanted to let you know I am still here in Kenya, preaching in schools, hundreds of children are making decisions for Jesus every day,” he wrote.

“This morning many students surrendered their lives to Jesus, and we are going to the next school right now.