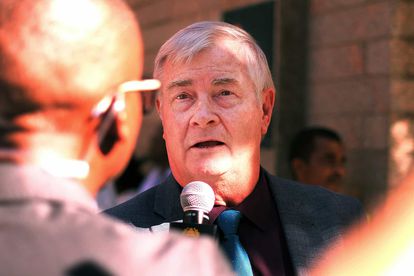 Pieter Groenewald enjoyed a rather successful election campaign back in 2019. The FF Plus leader saw his party claim 10 seats in Parliament, as the right-wing conservatives bolstered their vote share. However, maintaining that success in a municipal ballot won’t be easy, and the 66-year-old has since been challenged on his views about apartheid.

Make no mistake, Groenewald is clear that he does not want a return to the racially oppressive system, but there are some issues that he feels remain in a grey area. During an interview on SABC this week, he was asked if he thought that apartheid should be classed as a crime against humanity – to which the FF Plus leader gave a vague response.

FF Plus leader put on the spot

He was pushed again on the matter, but Pieter Groenewald ultimately refused to give a ‘yes or no’ answer. He instead asked for the public to judge apartheid in its historical context, even though he labelled the regime ‘regrettable’.

“That’s a story for another day. We must be quite clear that the UN Security Council never accepted that apartheid was a crime against humanity. I was not part of the National Party… but it’s not a matter of yes or no. It should be judged by the time and the context of history. I will reiterate, it was part of our history, and it was regrettable.”

“You won’t get a yes or no from me. I want to build a better future, not a better past. It’s no use going back to those days, we must do what is right for the rest of South Africa. “

Last year, an almighty controversy erupted when FW de Klerk, the last serving President of the National Party, denied that apartheid was a crime against humanity – which is perhaps why Mr. Groenewald is keen to tip-toe around the matter.

FF Plus leader, Pieter Groenewald says apartheid should be looked at in context – and says whether the era was a crime against humanity cannot be answered simply.