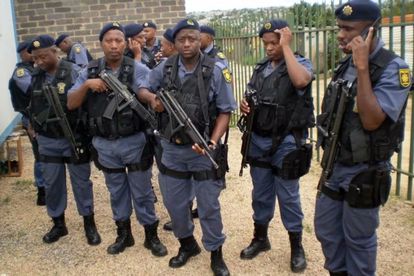 The Amaberete police officers, also known as the Tactical Response Team, will be deployed to patrol Soweto following the tavern shooting. PHOTO: Twitter/@babostoe

The Amaberete police officers, also known as the Tactical Response Team, will be deployed to patrol Soweto following the tavern shooting. PHOTO: Twitter/@babostoe

Police Minister has vowed to the community of Orlando East, Soweto, that he will be sending the much-feared Amaberete to patrol the area.

Cele was responding to complaints by residents of Nomzamo informal settlement on Monday during his visit. The Minister’s visit comes after the brutal killing of 15 people during a shooting at a tavern in the area.

WE ARE LIVING IN FEAR

Residents were given the opportunity to address their issues and concerns to Cele, stating that they often fear for their lives.

“Children were playing soccer some day and at around 4PM, a gunshot was heard and the kids scattered,  not knowing where to run to. Please deploy proper people. This place is a mess. You hear a bullet going over your head and you can hear that it’s a bullet.”

Another resident dressed in an EFF T-shirt and cap told the Minister that all they require is accountability from the police.

“Criminals don’t get arrested. All we ask for is accountability. People die every day and there is no accountability. If the police fail, then we fail. If you have to fire people, then fire them. Our brothers died there at that massacre,” he told the Minister.

AMABERETE TO COME TO THE RESCUE

Cele said he would bring in the Special Tactical Response Team (TRT), also known as Amaberete, to guard the crime-stricken community.

“You say the police don’t come here at night because they are scared. We agree that we are going to send police that will be here and patrolling. Today, when you go to bed, they will be patrolling your area.”

He said he will be deploying the Amaberete like he did during unrests and violence in Diepsloot and Zandspruit.

“When they arrive, you must feel their presence. We need to work with them to know of areas to patrol in this area… We want to saturate the streets with police so there are no criminals in the street… Amaberete will be deployed to Orlando and Nomzamo informal settlement.”

BUT WHAT ARE THEY KNOWN FOR?

If one looks up Amaberete on the internet, informal dictionary ‘Africtionary‘ defined the police unit as: “A term used to refer to the South African Tactical Response Team. Those cops that wear berets and moer people.”

The Amaberete indeed derive their name from wearing berets. They are the South African Special Tactical Response Team who have been criticised for their heavy-handedness after being established in 2009.

The unit was criticised for its brutal force on the public, particularly residents in townships. The unit was relaunched by former Police Minister Fikile Mbalula in 2017. They now target armed and dangerous criminals behind crimes such as hijacking, business robbery and crimes that involve violence.

Back in 2012, the unit apparently raided a tavern in the Vaal, attacking its patrons unprovoked and with no warning.

But in March this year, the much-feared unit came in 13th place in the 2022 UAE Swat challenge held in Dubai. The unit competed against 32 special forces teams from different countries around the world.

“After a rigorous and challenging five days of competing in tactical challenges, mock hostage rescue missions, as well as raid and obstacle challenges, the competition ended with the [unit] collecting 82 points, which secured them position 13 in the overall competition,” said the South African Police Service.