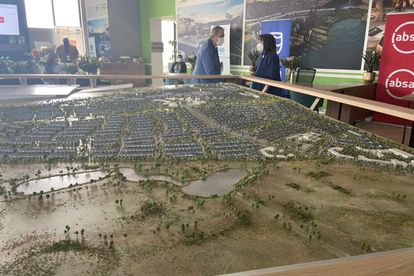 President Cyril Ramaphosa is launching the Mooikloof development on Sunday, as South Africa looks to dig itself out of an economic whole by investing heavily in infrastructure. The new city, located in Gauteng, looks to provide affordable housing and job opportunities for all sections of society, with a particular focus on uplifting the poor.

Where is Mooikloof? South Africa’s ‘new city’ launched on Sunday

This is, by all accounts, an ambitious project that will cost the government tens of billions of rand. Mooikloof is earmarked to become the next economic powerhouse in this province, providing a hub that is in close contact with Johannesburg, Pretoria, and the two neighbouring provinces of Limpopo and Mpumalanga.

The development will provide access to lifestyle services that have been previously inaccessible to individuals in lower-income groups. The new city is situated in the eastern part of The City of Tshwane and covers an area of approximately 200 hectares with all approved Conditions of Establishment in place.

The Mooikloof Mega City Development Project is a catalytic mega-scale development in the east of the @CityTshwane (CoT) with a development area of 198ha. The Project is a predominantly residential, mixed land-use development that will be implemented over a period of 5 to 7 years. pic.twitter.com/fu0dYGC23V

Mooikloof: The numbers behind the project

The development will complement the “help me buy a house” or Finance Linked Individual Subsidy (FLISP) programme initiated by the Department of Human Settlements, and it aims to encourage the socialisation of ‘mixed-income households’. Those earning between R3 501 to R22 000 can qualify for a subsidy.

We’re looking at the numbers behind the presentation, and they make for a fascinating read: Hundreds of thousands of people will be expected to move to the new city of Mooikloof, and prospective new citizens can expect the following: