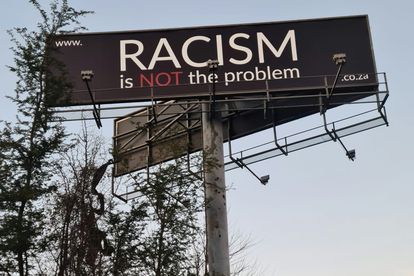 The Institute for Race Relations (IRR) has come under fire in the past week or so, after one of their billboard advertisements in Johannesburg was subjected to a raft of complaints from the public. The sign, which reads ‘racism is not the problem’ and directs passers-by to a website, could be taken down if these grievances are upheld.

‘Racism is not the problem’ advert causes controversy

The ‘racism is not the problem’ campaign is driven by the research facility, who are no strangers to making controversial statements. Taking to Twitter, the IRR confirmed that the divisive billboard is now ‘under threat’:

“Our billboard on the M1 South in Johannesburg is now under threat. A complaint has been lodged with the ARB calling for it to be taken down. Why is it so scary or wrong to say Racism is NOT the problem?” | IRR statement

M1 South billboard ‘could be taken down’

So, what is it all about? Well, the IRR has conducted a wide-ranging survey, asking South Africans what the biggest problems facing the country are. Just 3% of respondents claimed racism was the most pressing issue, when weighted against factors such as corruption or unemployment. The website goes on to state:

“Racism is NOT the problem. We have much bigger problems. To tackle the big issues we cannot allow those in charge to pretend the reason for their failure is that most people are racist or that racism is everywhere.”

“South Africa is a failing state in which most of our youth are unemployed, crime is terrifying, corruption is widespread, basic services are undelivered, and public education amounts to child abuse. These are exactly the major problems topping most people’s agenda, not racism.”

However, people are still upset with the contentious sign. After all, racism may not be the ‘biggest’ problem for some, but that doesn’t mean they won’t experience or suffer from it. The IRR’s own data suggests that roughly 19% of black people have experienced racism in the past five years, and Twitter users remain unimpressed with the campaign.

A white person with money and time booked a billboard on the M1 to tell us that racism is *NOT* a problem. Only in South Africa, our land.