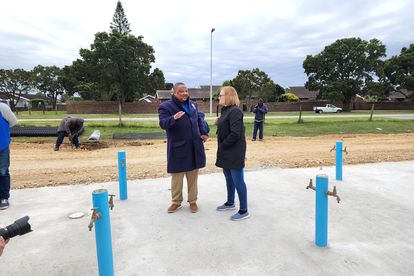 Large parts of the Nelson Mandela Bay Municipality – including the city of Gqeberha – are now on an unavoidable collision course with Day Zero. It’s predicted the taps will run dry at some point in the next week, and the situation has been branded a ‘humanitarian crisis’.

A lack of much-needed rainfall during a particularly punishing drought has put Nelson Mandela Bay, Gqeberha, and even the Eastern Cape as a whole in a difficult position. For a long while to come, life will be significantly altered for those based in the metro:

Oversight at a water collection point being constructed in Nelson Mandela Bay. I cannot figure out how they plan to manage the logistics of thousands of people using 48 taps in this suburb. The queues will be extremely long and traffic a nightmare. pic.twitter.com/18LGAmurvZ

Helen Zille bemoans ‘lack of preparation’ ahead of Day Zero

Helen Zille, the DA stalwart, has conducted an oversight visit to the municipality today. She has not been impressed by what she’s seen, claiming that NMB officials are still woefully unprepared for what’s coming.

Zille is particularly concerned by the state of some collection point taps, and she believes that the crisis is one that has been wholly manufactured by the region’s ANC government.

“Day Zero is set to hit Nelson Mandela Bay within a matter of days. This is a looming humanitarian crisis, and it could have been avoided if it wasn’t for the inability of the ANC-led coalition government to plan for this disaster and lead the City through it.”

“You need coordination in a state of disaster. Everyone must be on the same page and be willing to work together. Everybody must know what their role is. The DA will do all it can to assist residents during this unprecedented drought.”