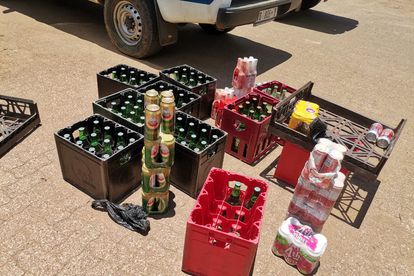 Be careful who you sell your illicit goods to: Three men in Pretoria have been busted by the local branch of SAPS, after they were caught running a ‘secret liquor store’, defying the Level 4 restrictions in the process.

It’s understood that the trio were stung by a tip-off to the police. The snitching soon lead to a swift visit from the cops, who shut the illegal business down immediately. Booze was being sold on the corner of Sisulu and Francis Baard, and Pretoria locals with a knowledge of nearby speakeasies had been visiting the spot ‘for the past week or so’.

“The successful arrest comes after the police received a tip-off about a spot where alcohol was sold on the corner Sisulu and Francis Baard streets. Upon arrival, they spotted three men coming out of the identified spot with bags containing alcohol. All suspects were taken to Pretoria Central SAPS and charged in accordance to the contravention act.”

After they were grassed-up, around R25 000 of liquor was seized from the premises. The black market for alcohol remains alive and well, as our fourth official period of prohibition continues to put the squeeze on legitimate vendors. Liquor traders are expected to mount a legal challenge against booze bans, as the industry struggles to survive.

As it stands, absolutely no alcohol can be sold, transported, or distributed at Level 4 – unless it’s for the industrial use of hand sanitiser or other non-consumable products. Social media users, meanwhile, aren’t too keen to ‘celebrate’ this particular bit of police work – and some argued that the lockdown laws are not being applied fairly:

Go to Nkandla and make proper arrest. People's livelihood you are celebrating?

Mxm what did u saps want those people to eat? they can't all get ppe tenders and people who bought are gonna drink from home or shld they go hunting for their meal since the lockdown adjusted for people to go hunt fo