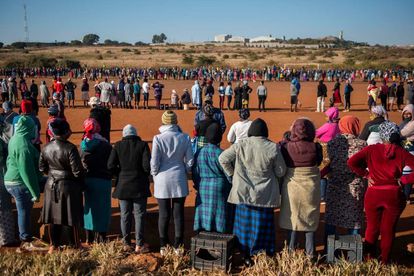 The Democratic Alliance (DA) said it is deeply concerned that “hungry” Gauteng residents only received food parcels once since the inception of the national lockdown.

THOUSANDS OF GAUTENG RESIDENTS RECEIVE A FOOD PARCEL ONCE

DA Gauteng Shadow MEC for Social Development Refiloe Nt’sekhe, in a statement released on Thursday 25 June, explained that residents only received food parcels once from the Gauteng Department of Social Development since the inception of the national lockdown period in March due to the deadly COVID-19 pandemic.

Nt’sekhe said it was revealed by the Gauteng MEC for Social Development, Nomathemba Mokgethi while responding to the DA’s oral questions in the Gauteng Provincial Legislature’s (GPL) virtual sitting.

According to MEC Mokgethi, the department has received 241481 food relief applications from March to May. Of these applicants, none have been reissued with food parcels.

SECOND ROUND OF FOOD PARCELS DEPENDS ON STOCK

The MEC stated that the second round of food parcel distribution will only be done as soon as the number of new applications subsides and depends on whether the food banks’ stock is replenished in large quantities so as to meet the demand.

“This is concerning because the department also underspends on food parcels and dignity packs distribution in the fourth quarter of the 2019/20 financial year,” said Nt’sekhe.

‘MANY FAMILIES ARE STARVING’

Nt’sekhe said it’s worrying that there are some families who do not have any source of income and are solely dependent on government’s food relief programme but have last received relief in March.

“This means that many families are starving yet they do not know when they will receive the second round of food parcels. This food relief programme is for a maximum of three months and the beneficiaries are supposed to have received food parcels three times over this period,” said Nt’sekhe.

The DA has called on MEC Mokgethi to speed up the process to ensure that no one suffers from starvation.

“The MEC should consider other alternatives such as food vouchers and e-wallet cash deposits to ensure that all beneficiaries have access to food,” added Nt’sekhe.