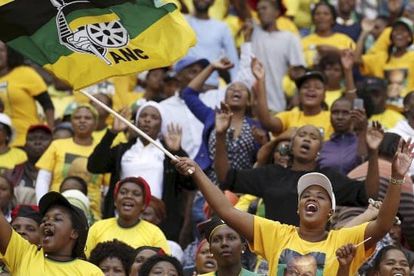 All eyes are on South Africa in the lead up to the local elections.

This is what the world’s top media organisations (mainly in the United Kingdom and United States) have been speculating:

This Bloomberg article focuses on what would follow if the ANC were to lose. According to the publication, the losses for the ANC would be quite substantial, resulting in calls for Zuma to be ousted and forcing the ANC to rethink its policies.

“The African National Congress faces the sternest test to its iron grip on South African politics since apartheid ended 22 years ago as rampant poverty, a weak economy and scandals associated with President Jacob Zuma threaten to alienate voters and end its control of key cities.” – Read more

While taking a similar perspective, the BBC mentions both the challenge to the ANC from opposition parties, and the internal squabbles within the ANC.

“South Africa’s African National Congress (ANC), which took power at the end of white-minority rule in 1994, is facing its toughest challenge – and not just from opposition parties in Wednesday’s local elections.”  Read more

The Wall Street Journal concentrates on the polls which show the DA as ahead in three of South Africa’s “most important cities”.

“Polls ahead of the Aug. 3 municipal votes show the pro-business Democratic Alliance, or DA, ahead of the ANC in the capital Pretoria, the economic hub Johannesburg and the manufacturing town of Port Elizabeth. Pressure is also building from the left, where the Economic Freedom Fighters led by former ANC youth leader Julius Malema are drawing in voters with the promises to take back white-owned mines and farmland.” – Read more

The Guardian: ‘This is when we break the mould’: South Africa at a political crossroads

The Guardian questions whether the “political map” in South Africa will be redrawn these coming elections. The article speculates as to what could happen if the ANC were to lose influence over the daily lives of approximately 14 million people.

“The stakes are undoubtedly high. Losing control of cities such as Pretoria and Johannesburg would deal an enormous blow to the prestige of the ANC and deepen already profound unease about the leadership of Jacob Zuma, president of South Africa and of the party.” – Read more

This piece by the Financial Times begins by describing a Democratic Alliance rally attended by crowds of black voters. It goes on to discuss how optimism in the ANC has “chilled”, the shenanigans surrounding Zuma, and the rise of Mmusi Maimane.

“South Africa’s municipal elections, which take place on Wednesday, have in effect turned into a referendum on the ANC. They are the country’s most closely watched polls in many years.” – Read more

According to this article, South Africa is once again “falling to the scourge of violence that has become part of the daily life of its residents”. The article discusses the murders of candidates and activists in the lead up to the election.

“These shootings are not the only incidences of political violence witnessed in the build up to the elections. In June, protesters in Atteridgeville, near the capital city of Pretoria, set vehicles and car tires alight, looted shops and stoned passing vehicles in a demonstration aimed at the ANC.” – Read more

Reuters Africa argues that the lack of affordable housing in South Africa may cost the ANC at Wednesday’s local elections.

“The housing deficit is an emotive issue in Africa’s most industrialised country, where 19 percent of families live in informal dwellings more than two decades after the end of apartheid rule despite promises by the ruling African National Congress (ANC) party to fast-track new homes for the poor.” – Read more

The Telegraph: Zuma in last-ditch plea for votes as ANC risks major losses in local elections

The Telegraph gives an overview of the situation in South Africa, emphasising Zuma and the ANC’s poor performance and the subsequent growth of the DA and EFF.

“The African National Congress (ANC) is facing major losses in local elections this week which could signal the end of its domination of South African politics.” – Read more

The Economist takes this one step further by taking a closer look at “the unpopular Mr Zuma” and his two much younger rivals “seeking to knock the ruling party off its post-liberation perch”.