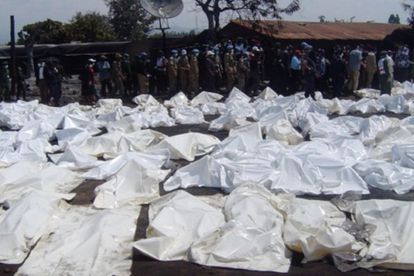 A graphic photograph circulating on Facebook and Twitter is said to show the badly charred bodies of 375 Christians murdered by Boko Haram militants in Nigeria. But the image – as evidence of a massacre – is false. –

A graphic photograph circulating on Facebook and Twitter is said to show the badly charred bodies of 375 Christians murdered by Boko Haram militants in Nigeria. But the image – as evidence of a massacre – is false. –

Accounts of Boko Haram attacks on the remote northern Nigerian towns of Doro Gowon and Baga near Lake Chad in early January are horrific.

Witnesses who escaped the assault have given graphic details of the terrible atrocities they saw as they fled for their lives. People were slaughtered “like insects” and houses and shops were torched. Corpses lay strewn in the streets and in the bushes on the outskirts of the towns and surrounding villages. According to one local government official as many as 2,000 people were killed. Other estimates put the dead in the “hundreds”. There were reports that men, women and children were shot, hacked and burnt to death, or drowned in Lake Chad as they tried to swim to safety.

But two weeks after the massacres in the neighbouring towns and as many as 16 surrounding villages, we still don’t know exactly how many died. “No one stayed back to count bodies,” one survivor told Human Rights Watch.

There are no journalists, government officials, soldiers or independent monitors in Baga at present. The area remains under the control of Boko Haram. There are no Internet connections and mobile phones have not worked in months since jihadists destroyed cellphone masts in the area.

So what do we know?

Not the first massacre

This is the second mass slaughter in the area in 19 months. Nigerian security forces, who have a long history of mass killings of civilians, dating back to the end of military rule in 1999,  were blamed for the first. On 16 April 2013, as many as 183 people were killed and more than 2,000 homes and shops were razed after a Boko Haram attack on a military patrol left one soldier dead and five wounded. According to Human Rights Watch, military reinforcements engaged Boko Haram fighters in running gun battles through the town.

The fighting raged for four hours. Witnesses later said that soldiers had gone on the rampage, shooting civilians and setting thatch-roofed homes alight. The Nigerian military blamed the militants, saying Boko Haram fighters had set fire to the buildings when they fired rocket-propelled grenades. And in a statement they claimed that only 37 people had been killed – 30 of them members of Boko Haram.

The most recent attacks began on January 3, 2015 and, according to witnesses who escaped, continued for at least four days. The BBC’s Will Ross reported that news of the initial attack broke on social media with a vague one-liner: “Attack on Baga. Loud gunfire heard”.

Yusuf Ahmed, a survivor of the massacre, told the UK Guardian that shortly after 5am on 3 January, he saw camouflage trucks filled with men in military fatigues driving into the town. He thought they were Nigerian soldiers. Only when he saw that the men weren’t wearing boots or berets, did he realise that something was terribly wrong. The men ran towards the town’s market and began looting stalls and shops. Then, with cries of “Allahu Akbar” (God is great), the shooting started.

A multinational military base on the outskirts of Doro Gowon, also known as Doron Baga, was attacked. The base was theoretically the headquarters of a task force comprising soldiers from Nigeria, Chad, Niger and Cameroon but at the time of the attack only Nigerian troops were stationed there.

Soldiers reportedly fought for several hours before dropping their weapons and fleeing into the bush. The BBC spoke to another witness who said “there was shooting from every corner of the headquarters of the multinational task force”. It went on for hours before the soldiers fled and the base was overrun. Some reports said that soldiers gave their guns to civilians in exchange for civilian clothing. As Boko Haram fighters swept through Baga and Doro Gowon people were slaughtered in the streets and hundreds of buildings, shops and houses were torched.

Yahaya Takakumi, a 55-year-old farmer, told Nigeria’s Premium Times: “We saw dead bodies especially on the islands of Lake Chad where fishermen had settled…Several persons were killed there like insects.”

Yusuf Idris, who was described as a member of local militia that tried to halt the attacks in Baga, said he taken shelter in the ruins of house and had hidden there for three days while militants looted and burnt everything in their path. Under cover of darkness he fled into the bush. “I walked through five villages and each one I passed was empty except for dead bodies,” he said.

Yakaka Abubakar,  who fled from Baga to Niger with her three children, spoke to an Africa Check researcher via the International Rescue Commission. She said that seven men who accompanied the group were killed on the journey. “The fighters ordered the women to leave the village after they burned it,” she said. “I cannot count the exact number of dead bodies I saw during my trip. Everywhere were dead bodies of men, women and even children.”

Hundreds of other Baga residents apparently tried to flee across Lake Chad. There were reports that dozens drowned and that others were stranded on Kangala Island.

The United Nations High Commission for Refugees said that at least 7,300 refugees had arrived in Chad between 31 December 2014 and 9 January 2015 after fleeing attacks on Baga and surrounding villages. By January 15, that number had reached 13,000. The International Rescue Commission in Niger told Africa Check this week that it was assisting 572 refugees who fled from Baga to the Diffa region that borders with Nigeria’s Borno state.

There are no accurate figures for the dead in the Baga massacre and there may never be. Death counts for the Boko Haram insurgency are notoriously inaccurate.

Suggestions that as many as 2,000 people had been killed first surfaced in a BBC news report published on 8 January. Musa Alhaji Bukar, “a senior government official in the area”, was quoted saying that Baga – a town with a population of around 10,000, according to the most recent census data from 2006 – was now “virtually non-existent”. The report stated that while Bukar “raised fears that some 2,000 had been killed in the raids, other reports put the number in the hundreds”.

“If reports that the town was largely razed to the ground and that hundreds or even as many as two thousand civilians were killed are true, this marks a disturbing and bloody escalation of Boko Haram’s ongoing onslaught against the civilian population,” it stated, quoting Daniel Eyre, an Amnesty International researcher.

Other reports put the death toll in the hundreds. “To say 2,000 people were killed is on the high side,” the local district head, Baba Abba Hassan, told the LA Times. “The death toll could run into several hundreds.”

“As we were running for our lives, we came across many corpses; both men and women, and even children,” Ibrahim Gambo, a refugee from the area, said. “All I know is that the death toll is well over 500 because I have seen several groups of killed villagers and the least of such group were five persons.”

The Nigerian military initially said the description of the attack as “the deadliest” was “quite valid”. But a Nigerian military spokesman, Major-General Chris Olukolade, subsequently sought to downplay the slaughter, saying: “From all available evidence, the number of people who lost their lives during that attack has so far not exceeded about 150 … including … terrorists who were bearing arms and got killed in the course of … battle with troops.”

In a statement, the military claimed: “The figure given by sources who claim to be eye witnesses must be an extremely exaggerated estimate. Unfortunately, this figure is now being bandied about in a section of the media as if it has been authenticated. It cannot be true.” But the Nigerian military is notorious downplaying death tolls.

Images of a massacre

On social media networks, spurred on by the hashtag #BokoHaramKilled2000People, the claimed 2,000 death toll quickly became fact. Many of the tweets were accompanied by horrific images of butchered, burnt and mutilated corpses that purported to show the massacre in Baga. None of them did.

One of the most disturbing photographs showed rows of charred bodies lying in the sun. But, as Africa Check reported last year, the image does not show a Boko Haram massacre but the aftermath of a fuel tanker explosion in the Democratic Republic of Congo in 2010.

Another ghastly image showed the burnt corpses of a mother and child. We have been unable to verify its exact origin, but according to Google and the reverse image search engine, Tineye.com, the image has been circulating since at least 2010 and is therefore not from the recent Baga attacks. Given the condition of the bodies, they may have been victims of the fuel tanker explosion, but we cannot say for certain.

Yet another photograph attributed to the Baga massacre shows a crowd clustered around a mass grave. However, that image dates from a massacre near the city of Jos in March 2010.

Even a Reuters photograph of a group of men lying face down outside a police station after their arrest in the city of Bauchi in northeastern Nigeria on 25 July 2009 (See the caption at the bottom of the page) has been passed off as evidence of the Baga massacres and has spread widely on the web and Twitter.

Another image that has gone viral on Twitter shows a pile of bloodied bodies lying in street. It is also not from Baga but was taken in July 2009 by an Associated Press photographer outside a police station in the town of Maiduguri after clashes between Nigerian troops and Islamist militants left hundreds dead.

To date we have been unable to find any verifiable images of the Baga massacre. (Read our guide to spotting online fakes and hoaxes for tips on checking images like these on our website.)

Satellite images released by Amnesty International and Human Rights Watch on 15 January 2015 do however capture the enormous scale of the destruction in Baga and Doro Gowon.

According to Human Rights Watch, the images show that Doro Gowon – the site of the multinational military base – bore the brunt of the assault “with extensive areas of destruction covering approximately 57 percent of the town”.

“It is likely that several thousand residential and commercial buildings have been destroyed as a result.”

Satellite images show that “arson attacks likely occurred in Doro Gowon during the evening of January 3 and the morning of January 4”and that “approximately 11 percent” of Baga – about 3km away – was razed.

Amnesty International has estimated that “over 3,700 structures” in Doro Gowon and Baga were “damaged or completely destroyed”.

“These detailed images show devastation of catastrophic proportions in two towns, one of which was almost wiped off the map in the space of four days,” Daniel Eyre, Amnesty’s Nigeria researcher said.

“Of all Boko Haram assaults analysed by Amnesty International, this is the largest and most destructive yet. It represents a deliberate attack on civilians whose homes, clinics and schools are now burnt out ruins.”