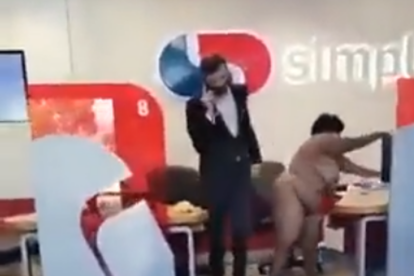 In the video that went viral on social media, the woman is seen going into an attack in her birth suit, leaving customers and bank staff in frightful dismay.

The lady went into a consultant’s service booth where she grabbed electronic equipment that she smashed to the ground. The consultant, keeping his utmost cool, got up to walk away while talking on his mobile phone.

As the livid naked woman moved to a different service booth to continue the crashing, customers began running out of the branch, while the branch staff disappeared into the backrooms of the bank office.

The popular retail bank soon went on social media to break the silence after the shocking and confusing scenes.

Capitec said it was left baffled and will be attempting to get to the “bottom of this.”

“Hi there, we at Capitec are as perplexed by this matter which happened at the Strand branch, as everyone else. We are trying to get to the bottom of this,” the statement said.