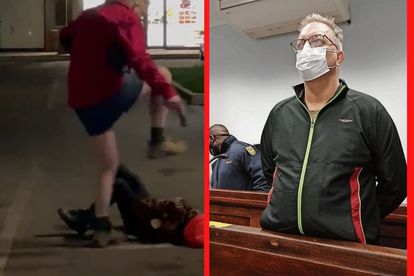 What happened before the shocking assault on the Limpopo teenager? Photos: Screengrabs/Video/MIddelburgObserver

What happened before the shocking assault on the Limpopo teenager? Photos: Screengrabs/Video/MIddelburgObserver

What led to the shocking assault on the Limpopo teenager?

SO WHAT HAPPENED BEFORE THE SHOCKING ASSAULT?

According to National Prosecuting Authority (NPA) spokesperson, the teenager was inside Fatcajke city and had asked the man to use the same seasoning when the 52-year-old man, Corrie Pretorius, became furious. Pretorius pushed the teenager outside and assaulted him while pointing him with a firearm.

The vicious assault was caught on camera.

In a video that shocked the nation, Pretorius can be seen viciously attacking, kicking, and stomping a defenseless teenager while brandishing a gun.

According to NPA Regional Spokesperson Mashudu Malabi-Dzhangi the incident happened at the Groblersdal Game Shopping Centre on 15 June 2022.

“It is alleged that the complainant and his cousin were at Fatcake City shop when the victim asked to use the same seasoning as the accused.

“He became furious and started assaulting the minor boy by pushing him outside the store. He continued assaulting the boy while pointing him with a firearm, until the accused eventually left the complainant lying on the ground.”

THE INJURED TEENAGER WAS TAKEN TO HOSPITAL

He said the teenager was later taken to Groblersdal Hospital, where he got medical attention and was later discharged. Pretorius was arrested on 16 June.

Pretorius appeared in Groblersdal Magistrates’ Court on Friday on charges of assault with intent to cause grievous bodily harm to a 16-year-old boy and pointing of a firearm.

The matter is postponed to 24 June 2022 for bail application. Pretorius will remain in custody.

Meanwhile, the Executive Mayor of Sekhukhune District Municipality Cllr Julia Lata Mathebe condemned the act of violence against the teenager.

“We are saddened and condemn this barbaric behaviour, there’s no place for violence in our society. Whatever the issue might have been between teenager and the unknown man, being violent is never the answer to resolve any conflict,” said Executive Mayor.