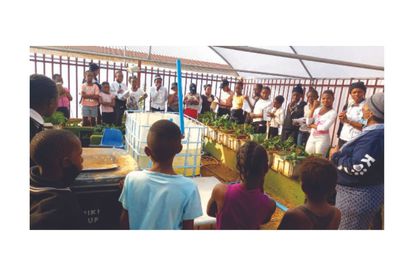 Lesedi La Kreste Anglican Primary School in Orange Farm is helping to alleviate hunger in its community through aquaponics.

Aquaponics, a food production system in which fish are raised in tanks of water where plants are also grown, is being used by the school to provide fresh, top-quality fish and vegetables.

The school built its first aquaponics system in 2011 and recently upgraded it to include a greenhouse, more grow beds, a new pump and a seedling nursery.

The teacher responsible for the project, Pinkie Motlanyane, says aquaponics is convenient, as more crops are produced in a smaller space. “It also saves time and water because the system runs by itself and no watering is required, and it provides learners with knowledge and skills for a different kind of farming.”

Over the years, the project has become more popular among pupils.

“It was initially part of the activities done by a small group of learners in the Environmental Awareness Club, which focuses on recycling, cleaning and greening our school. We have grown to include about 70 students from Grades 1 to 7, divided into two groups of seniors and juniors. Each group attends lessons every Wednesday for an hour,”

“The learners seem to develop a level of emotional intelligence through caring for plants and animals. It also provides an opportunity for practical learning, instead of only theory.”

ALSO READ: UIF hopeful that R1.8bn in Bounty Brands investments will be recovered

“The vegetables help to alleviate poverty as the kids can sometimes take them home.  The greenhouse expansion has also enabled parents to take part and volunteer,”

Motlanyane encourages other schools to embark on a similar journey. She says aquaponics can provide sustainable food security and innovative agricultural education to learners and communities. It is interactive, educational and exciting for everyone, she adds.