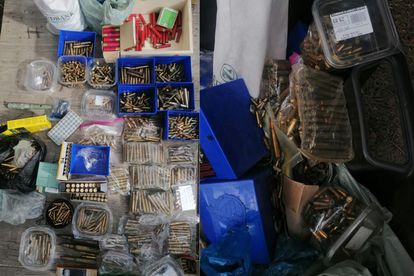 A 40-year-old suspect was arrested for possession of ammunition in Botrivier. Photo: SAPS.

A 40-year-old suspect was arrested for possession of ammunition in Botrivier. Photo: SAPS.

A 40-year-old man was arrested in Botrivier, Western Cape for the possession of unlicensed ammunition on Tuesday, 19 July, after an intelligence-driven operation by police.

“During the search of the entire premises, they confiscated a consignment of different calibre ammunition,” said the police spokesperson.

The suspect was unable to produce a valid license for the ammunition and was subsequently arrested.

The 40-year-old man is expected to make an appearance in the Hermanus Magistrate’s Court once he is charged.

In an unrelated incident, two men – aged 44 and 33 – were arrested by the police for selling weapons and ammunition to criminals in Alexandra and Cosmo City on Tuesday.

The two suspects were found in possession of more than 20 rounds of ammunition and four unlicensed guns.

The duo were charged with dealing and possession of firearms and ammunition. It was revealed that they had previously been arrested for the first offence.

“The improved working relationship with our communities and sharing of information is beginning to give us the desired outcome of addressing the proliferation of firearms and violent, crimes,” said Gauteng police commissioner Lieutenant-General Elias Mawela.