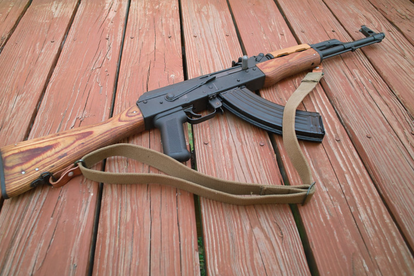 The firepower is enough to do battle in a mini-war. A veld in the West Rand has become a scene of AK-47s and loads of high-caliber weapons on Thursday morning 21 October – thanks to a call from local firewood collectors.

“It is alleged that on October 21, 2021, at about 10am, people were collecting firewood in the veld, when they stumbled upon a pack of stun grenades,” Gauteng police spokesperson Colonel Dimakatso Sello said.

“The police officials were notified and relevant police departments were immediately mobilised,” Sello said after finding the AK-47s in the West Rand.

According to the police, the arms weaponry included multiple AKs, nearly two dozen hand grenades, advanced pistols, and an abundance of ammunition rounds.

West Rand police confirmed a case has been opened to find any details that could lead to arrests.

Staying with the West Rand, a police officer was killed by a drunk driver who failed to stop at a roadblock that was set up in Khutsong last Saturday night.

It is believed the driver then hit a stationery vehicle and WO Esterhuysen, who was controlling the traffic. “The suspect tried to flee the scene, but other members managed to stop him, and it was established that he was drunk,” Esterhuysen said. Full story here.